Spent some of today moving some figures forward- 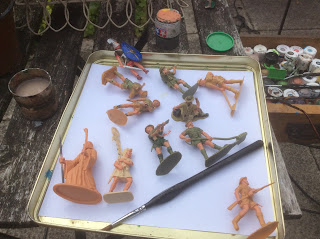 Firstly some Albion desert infantry, from various manufacturers, for use with the Frankish foreign legion and Arab figures. Secondly some ancients - an Expeditionary Force Druid which will be a fine addition to my Celts and a legionary standard bearer ( thanks Tidders for these unexpected recruits) who with some Roman odds and ends will form a group of first century Romans ( survivors of a defeated army)  trying to get back to to their own troops. In other words a skirmish game with a little role playing element re skills etc.
Later in the day the post man arrived with some Frankish recruits- 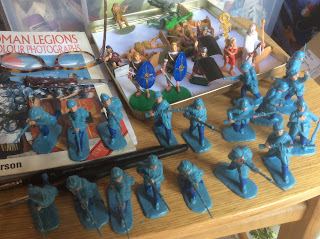 In the form of AIP ww1 French. I am painting them up as 1930 Chasseurs a  pied to fight alongside my Chasseurs dAlpine to oppose the Duchy of Volare. In the background are some Roman damaged figures getting new shields and others converted to auxilia. I hope to get a little more done tomorrow.