Firstly a photo of the top of one of the bookcases- 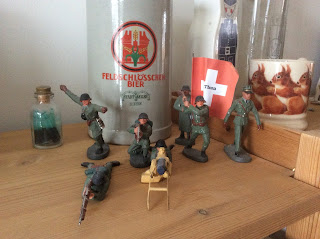 These are Elastolin Swiss, made of composition material bought in Switzerland on a family holiday in the early seventies. They were bought from a small newsagent/tobacconist near where we were staying. The set dressing beer mug is from a local charity shop. These figures are old friends.
Yesterday saw rain here and a cold day so I moved forward the next stalled project, 16th century Irish 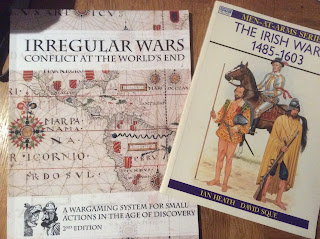 I looked out this Osprey classic bought in 1993 and the rules I intend to use. This project is a small game for my regular opponents and I to play on the kitchen table here as opposed to big games in his wargames room. I had edition one of the rules and bought the next when it came out.
http://irregularwars.blogspot.com/p/irregular-wars-conflict-at-worlds-end.html 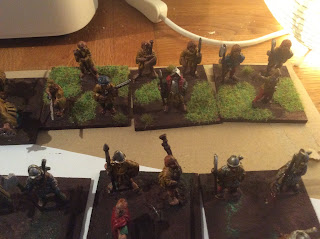 The figures are 28mm and were bought from Hoka Hey Wargames. I like the way the sculptor has based some figures on 16th century illustrations. Follow the links to find out a little more of the rules and see some games the author played using them.