Derek Guyler was one of these actors which featured a great deal in the television of my youth. He played a variety of characters particularly in  comedy programmes. Some of you will remember him. He was also a wargamer. I was looking at a couple  pictures of him this week on line.
This one is well known to me. I have edited out Phil Barker ( no offence meant) in order to concentrate on the non elephant figures. I normally focus my attention on the wonderful elephants and so ignore the other two larger figures which I assume to be 54mm . Does anyone recognise them? 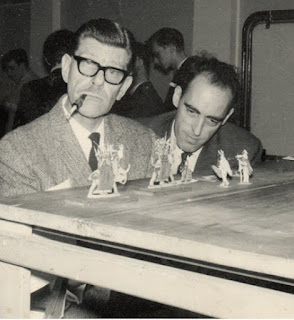 The second picture ,below, is new to me. The siege tower is a fantastic piece of work. I assume it to be scratchbuilt or perhaps 70mm Elastolin? Does anyone know? 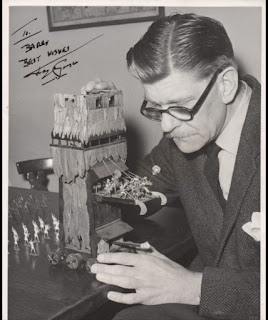