I took this photo tonight. It shows the "new" movement trays I had bought some time ago. I still need to flock them to match the individual round bases of the figures. The postman managed to 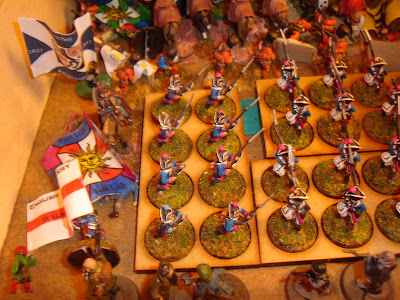 get through the snow and delivered "Tithe War" by Carol Twinch which looks a good read and has inspiring photos for painting up a vbcw figures. I hope you are warm wherever you are tonight-tucked up in front of a roaring fire ( or radiator ) with a good book...

Posted by tradgardmastare at 19:54 3 comments:

A way through the woods (of projects that is)

Firstly may I say thanks to all for their good council 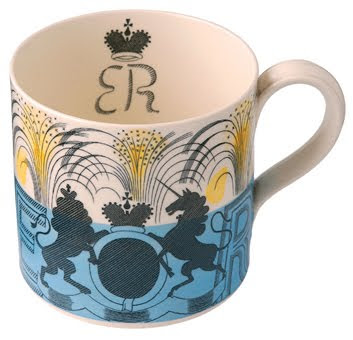 . I have decided upon two main projects to
run with this year. These will be run in conjunction with the Funny Little Wars 54mm Swiss project and the ongoing story of the Duchy of Tradgardland and her enemies big and small(syw with Charge/Grant rules) 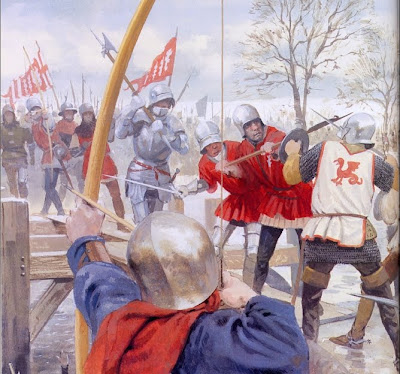 .The first of the projects will be ( here represented by the Ravilious designed Coronation mug) 1938 a VBCW. This will probably take the form of a series of games based upon tithe wars in Norfolk/Suffolk. Forces will include English Array/Mistery, local defence volunteers,farmers - with perhaps support from the B.U.F,regulars and the Anglican League defending Walsingham from forces loyal to Edward v111 and others. Figures ordered from Musketeer miniatures with others in the pipeline. Rules are old school ones available free from Empress figures...
The second project (here illustrated by painting) is to gather Yorkist forces for the Battle of Towton in 1461. Figures are Foundry supplemented by plastic Perrry probably. Rules will be Terry Gor'e Medieval warfare....
More details to follow and figures to be undercoated. I am sooo tempted by a tankette for English Array.
I am currently planning a rather interesting development in Tradgardland with a "soldier of fortune" from Luteland being waylaid upon the way and persuaded ( by a heavily protected chest of gold) to offer his services elsewhere. Watch for developments soon!

Posted by tradgardmastare at 19:24 2 comments:

Well its another year,one that will see me reach my half century in three months. I begin the new year with even more hobby projects than at this time last year,not to mention the embryonic ones in my mind forming as I type.I don't want to let folk down by not doing "my bit" by either blogging or finishing figures etc. Don't get me wrong the projects are all utterly engaging and the new ones ( or old ones revisited) have enhanced my life - I have corresponded ( and continue to correspond) with super people and learned so much,not to mention being inspired. However I am no ( fill in the name of your favourite painter modeller) in terms of commitment,constancy,quantity and quality!That finite amount of time/energy for the hobby seems to get less & less,especially the energy bit!I start so much and finish little of worth. So I am asking how do I square the circle,progress things and still make it fun? I await your answers with great interest. Thanks in advance for your council...
Addendum: On finishing this post I went through to the kitchen for more coffee and looked out to see yet more snow falling- not forecast when I last checked. It is a Christmastide weather wise like no other I remember. Once more I am captivated by the magic and beauty of falling snow!
Posted by tradgardmastare at 08:01 12 comments: