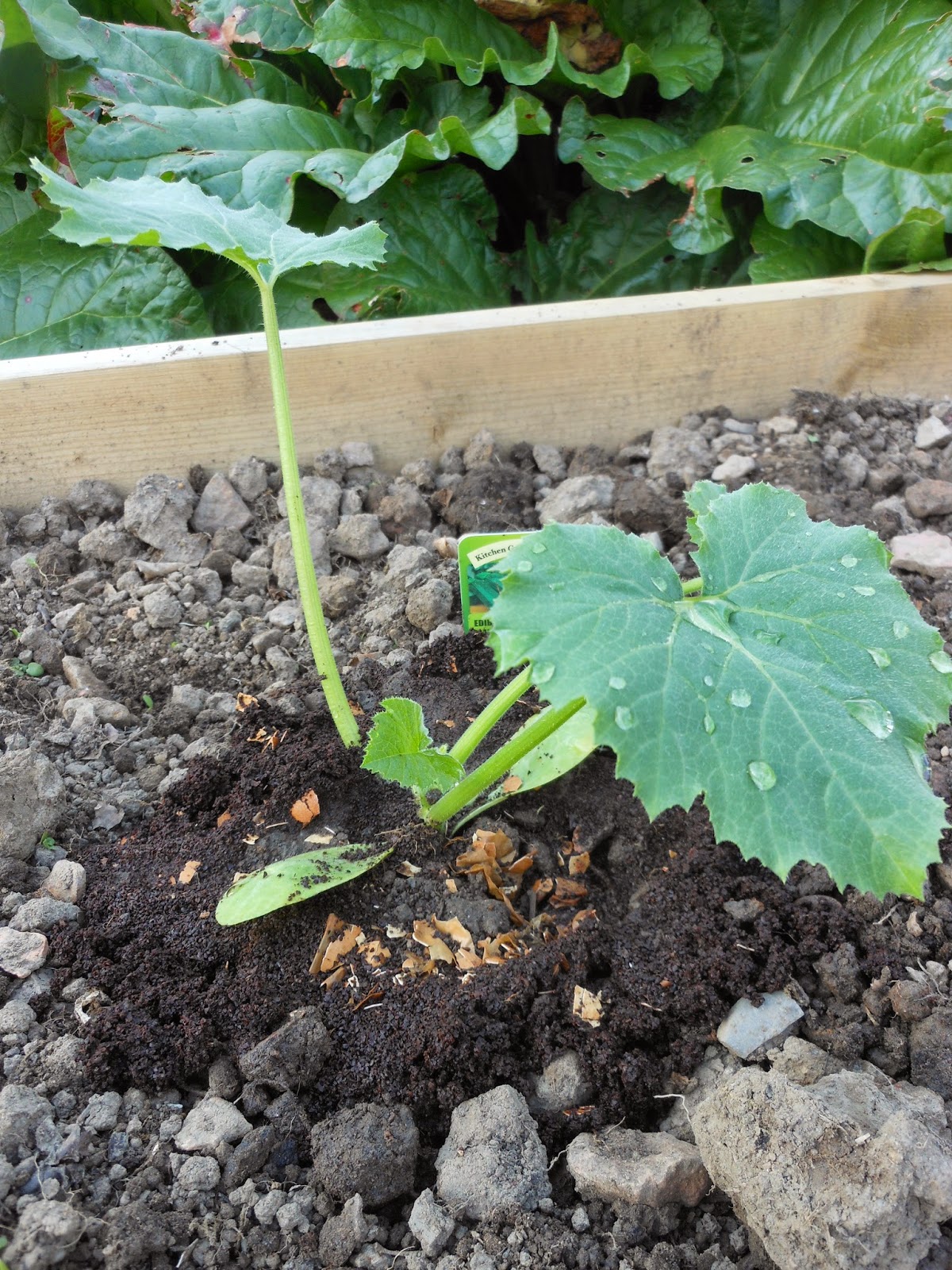 The annual war has begun- we plant courgettes ( and other tender plants) and the slugs attack.This year we are armed with coffee grounds and ground egg shells.We garden organically so no nasty slug pellets are allowed. We shall see who wins. Jan put some barrier stuff round her antirrhinums which we bought today - evidently it is rather absorbent too.We shall see who wins us or the slugs...
By the way what do you chaps use?
On the subject of invasions I picked this uptown for a fiver- 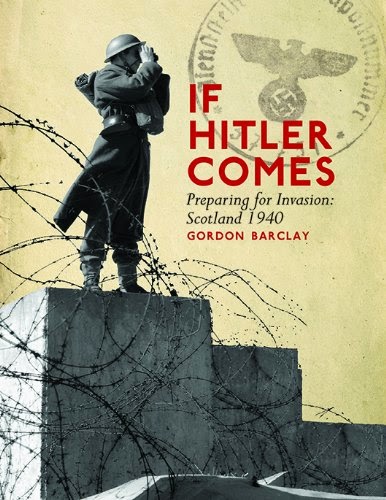 Published in 2013 and remaindered I fear.
Looks an interesting read and inspiration for some games I fear...
Posted by tradgardmastare at 19:00 7 comments:

Real life has got in the way of almost everything at the moment.Work is overshadowing most of my time and energy and morale is a tad low. Things were boosted by the arrival of these splendid chaps who were waiting for me when I got home- 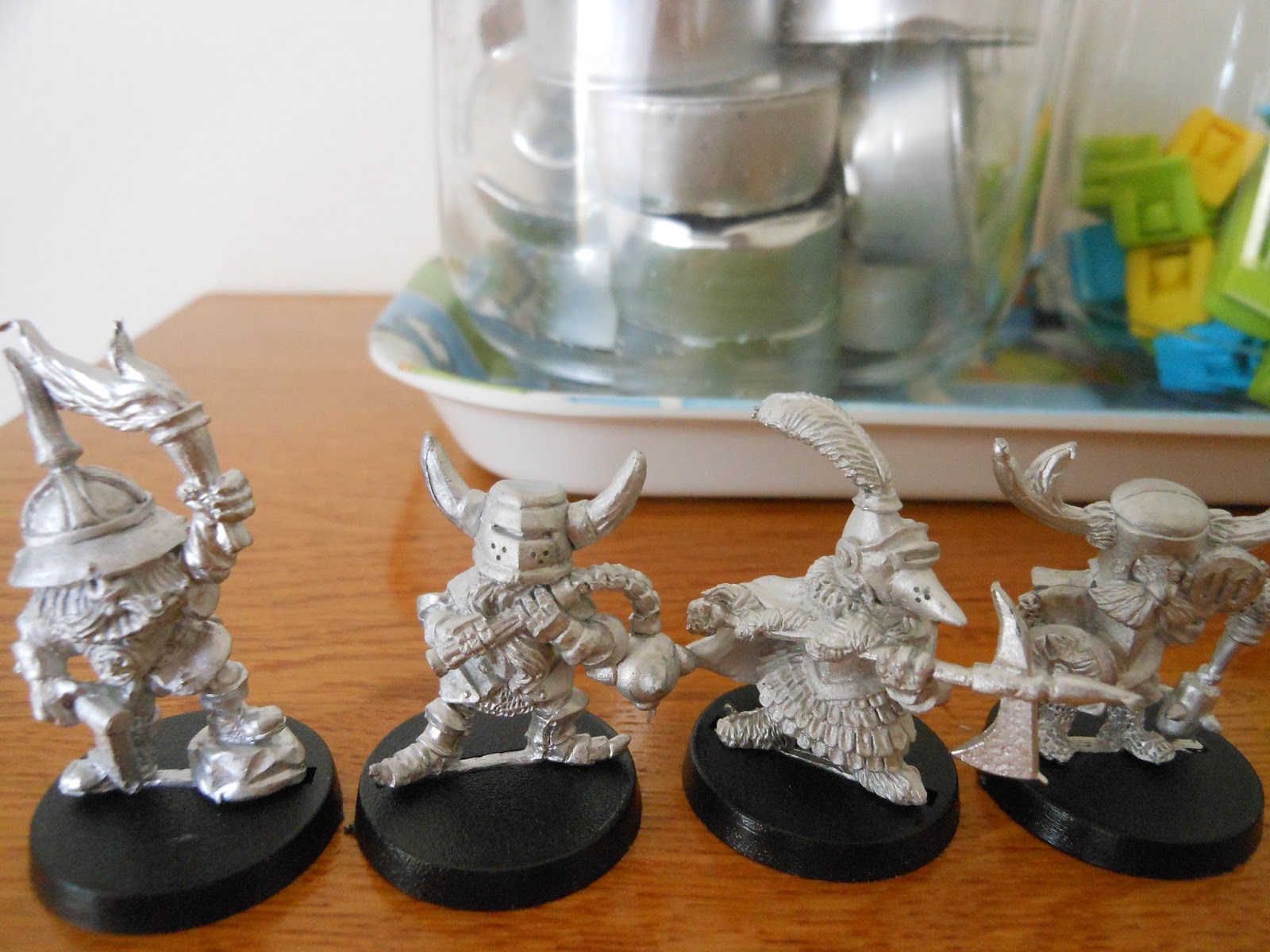 I can't wait to paint them (though it may be some days at least before I can start on them) and see them in action.More info can be found at
http://www.northumbriantinsoldier.co.uk/index.php?page=nightfolk

where more of these quirky figures can be seen. Although tired, I have really enjoyed thinking of a background for these fellows which has grown and grown over the last few days of train journeys to and from work. Notes are being scribbled and flights of fancy jotted down.So much fun can be had in our hobby by planning and preparing scenarios and backstories.
Posted by tradgardmastare at 20:11 4 comments:

Off with their heads and on again soon...

I have been at home today as it is an Edinburgh Monday Holiday. Most of the day has been consumed with work related paperwork but some time was devoted to other things of a more agreeable nature. Reinforcements arrived today- 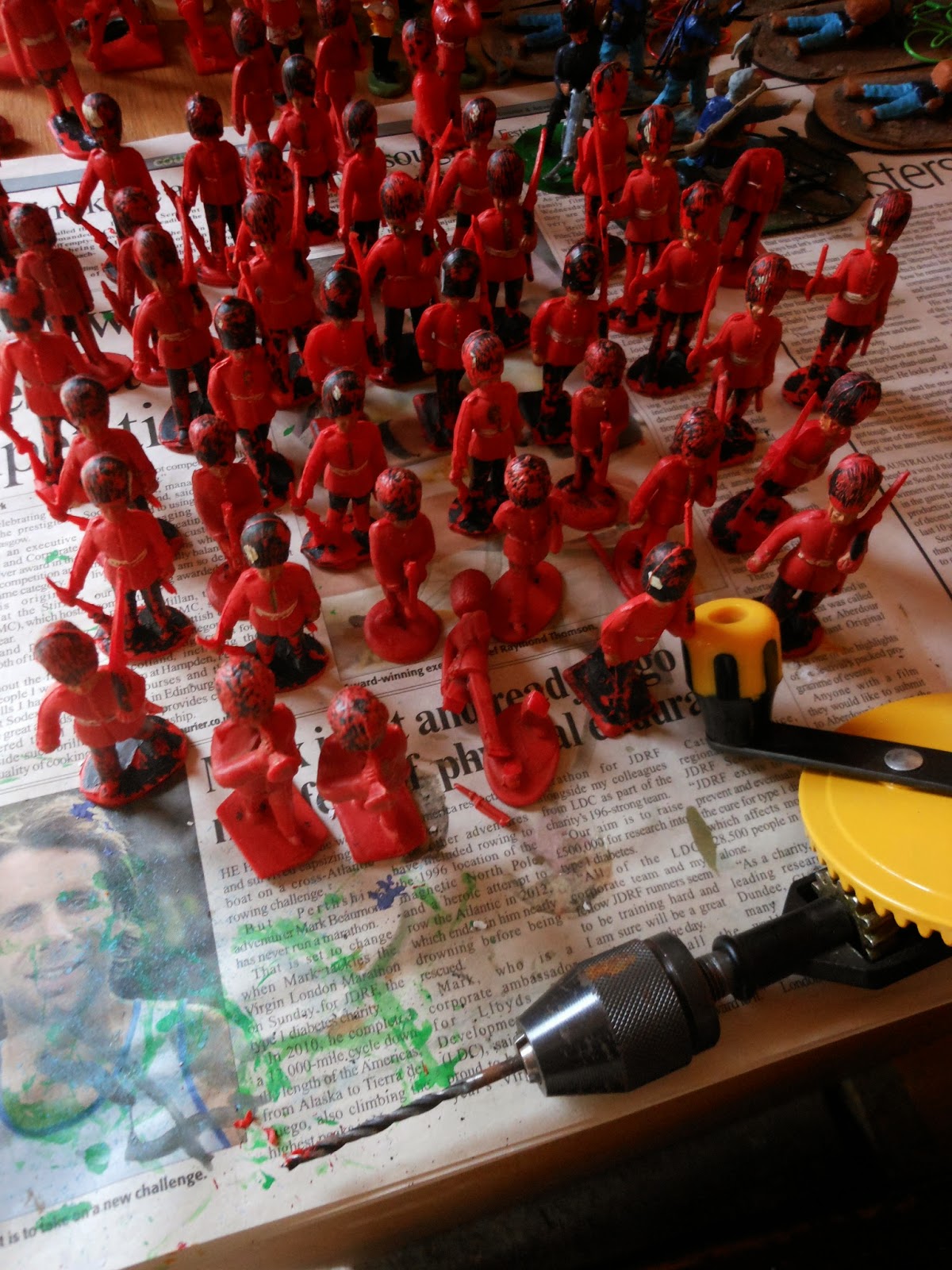 Some did not survive the journey and some have a propensity to fall apart if touched but they will serve I think.Please note the very fine model drill in the foreground. 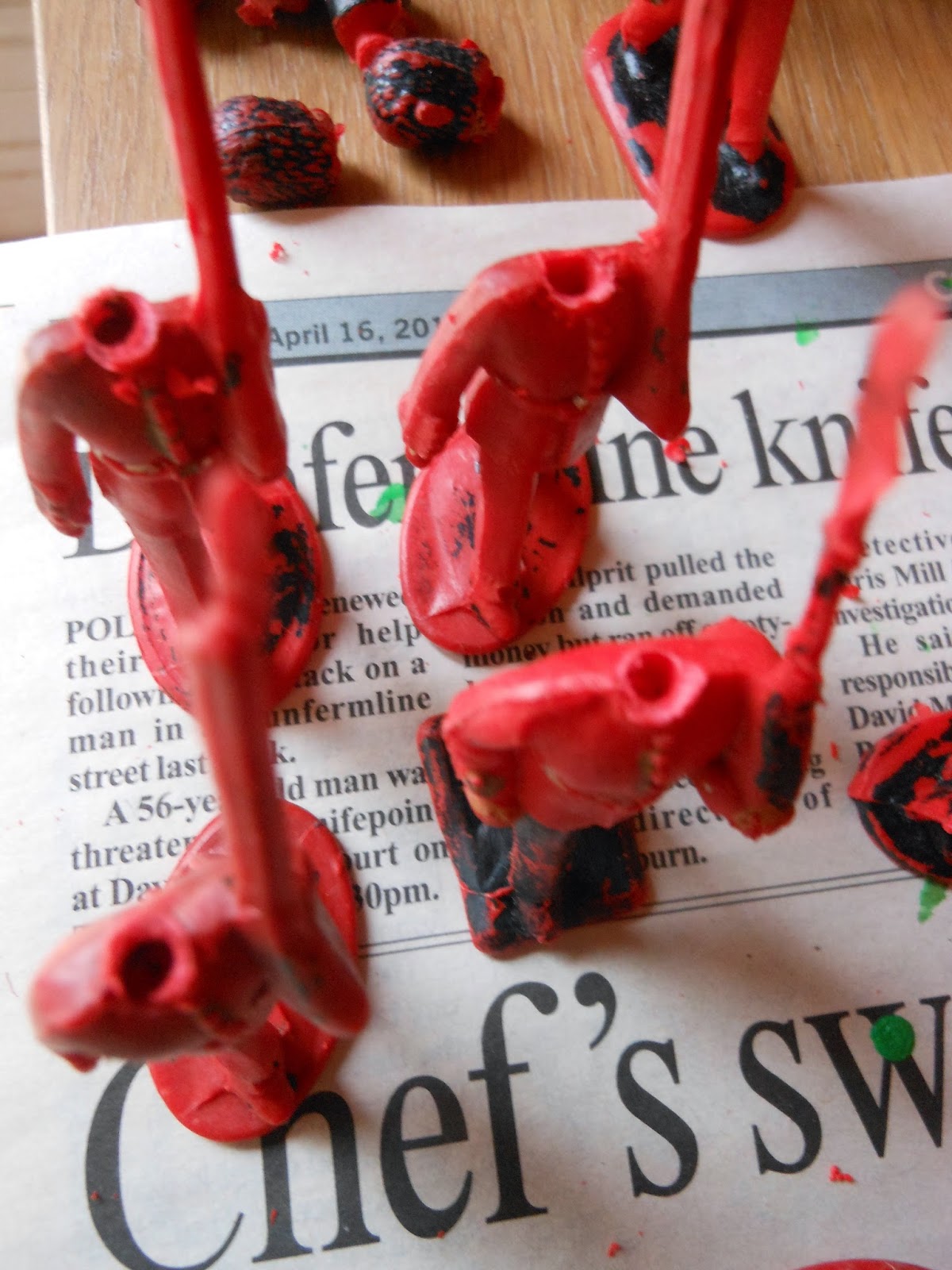 Here are some of the figures after the fine drill from the previous picture was used. I intend to fit metal heads to depict Danish infantry of the 1880's.More on this project soon I hope...
Posted by tradgardmastare at 18:31 3 comments:

on the paint table again... 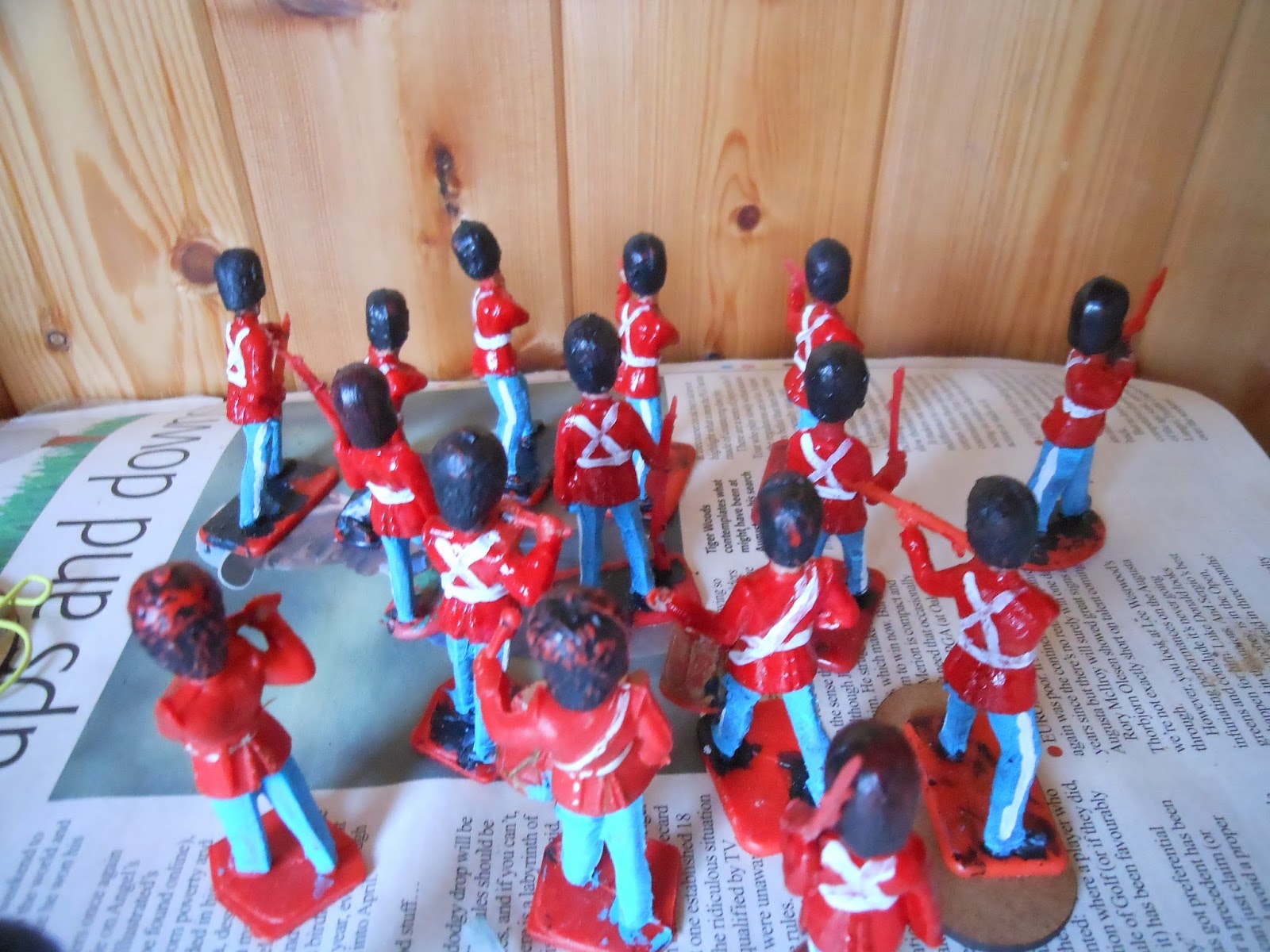 The 54 mm chaps on the painting table have evolved,happily I hope, from a unit of Grenadier Guardsmen into something else in the midst of their painting.No prizes for guessing  who they are now...
Posted by tradgardmastare at 20:01 No comments:

Friday early-a busy day ahead , a looong week at work, the black dog sniffing about and extreme tiredness have left me really ready for the weekend when it comes.I have enjoyed this week watching the seeds germinate and the beech hedge turn green. I have mused about the hobby but  done virtually nothing.

I have browsed the web and enjoyed the efforts/plans/blogs of others.In doing so I have found an interest in somewhere I had hitherto known little or nothing about- Glorantha. Perhaps it has something to do with seeing the splendid Macedonian figures at the show last weekend, a totally different fantasy setting  combined the interesting races involved.Perhaps I am reminded of the broo I owned many ,many moons ago.Whatever it is I am left with the desire to find out more get a few figures and try a wee skirmish or two.But that is the thing .Can anyone recommend a way in to the Mythos?I am overwhelmed by the amount of info on the web.I'm in search of a primer can you suggest anything?

Posted by tradgardmastare at 06:28 4 comments:

Tony asked me the following-
"Would it be possible to add a link (above) in your next post on your blog , as I cannot contact the rest of my followers who I do not have email addresses for . As I think many of the people who follow you also follow me as well . Cheers Tony"
http://tonystoysoldiers.blogspot.co.uk/

No sooner said than done Tony!
Posted by tradgardmastare at 20:21 4 comments:

Sunday Morning.
I had a most enjoyable visit to Carronade yesterday. Although I didn't see as many of my fellow wargamers to talk to as I would have liked it was an excellent trip.There were many interesting game to see including an impressive one in 54mm  with loads of Napoleonic figures on the tabletop.
What caught my eye was an ancient battle between Thracians and Macedonians fought over a dry river bed with accompanying dry looking terrain.Not only was the game a visual delight but the players were keen to chat .After all ,engaging with the public is an essential part of putting on a display game.Of late at shows I have found myself standing at a table watching with interest only to be ignored as players pour over the game- something more appropriate for club or home games.When I have put on games at  shows in the past the conversations generated were almost more important than the game,something  vital to get new people into the hobby...
We popped back a few times to see the game progress and I hope the Thracians eventually won. They were using rules by Crusader Miniatures which look interesting.Here is a photo of my purchases- 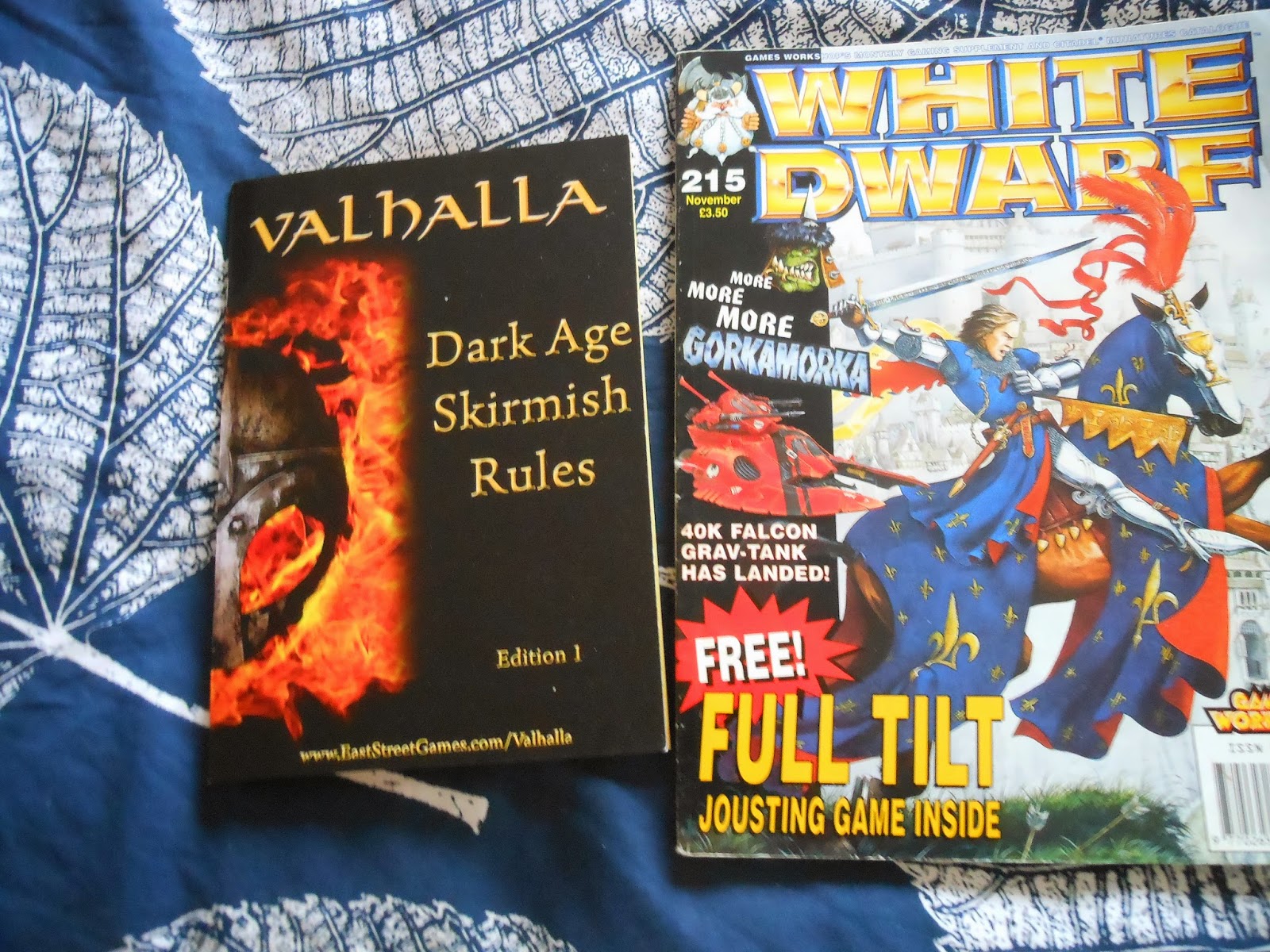 A 50p White Dwarf from 1997 bought for the jousting rules inside and an interesting set of rules.
The rules were being sold by a very friendly chap called Paul.Here is a link-
http://valhalla.eaststreetgames.com/
Th game looks most interesting and one can up load a picture of your painted figure to the website and have it's stats worked out and a play sheet prepared to aid gaming.Straightforward rules scenario based- just what one needs.
My regular opponent and I went looking for a wee project to get our gaming back on course and Valhalla was just the ticket.I bought the rules whilst my regular opponent bought a boxed set including Saxons.I intend to use some Dark Age Scots I already own.We are working towards a games in six weeks or so...I can't wait!Do give the rules and website a look!You won't regret it!I wish Paul every success with his excellent product...
Posted by tradgardmastare at 07:15 4 comments:

Any of you chaps going to the Carronade Show in Falkirk tomorrow? I intend to go,if you do see me please pop over and say hello.
Posted by tradgardmastare at 16:36 1 comment: 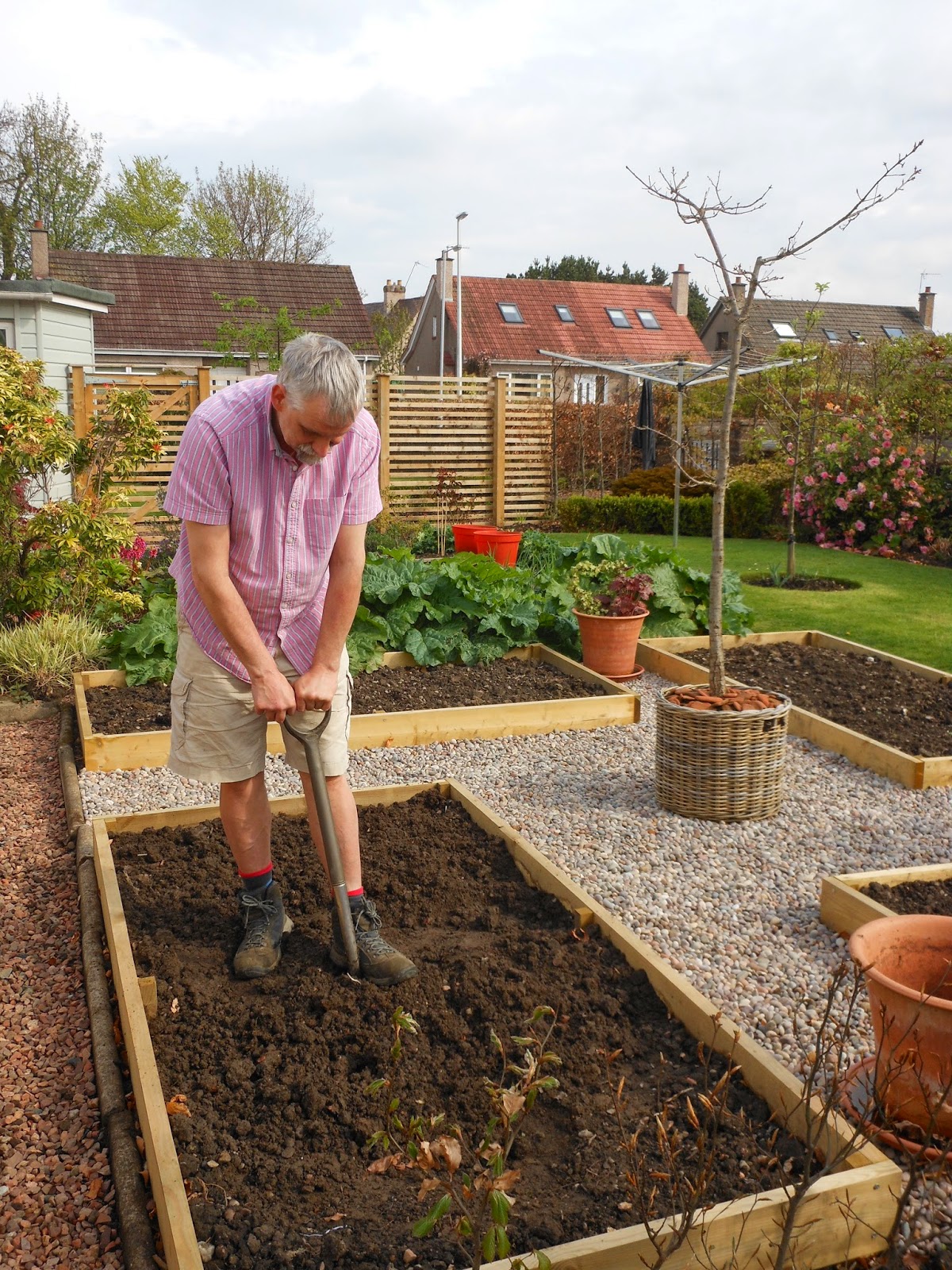 Much of the weekend Jan & I gardened companionably and to good effect. We bumped into Tom, on Saturday, uptown and talked of Carronade next weekend in Falkirk which I also hope to attend.
Gardening for me is both a pleasure and therapy.It is honest toil rather than the exhaustion of 21st century work. Here is a picture I like- 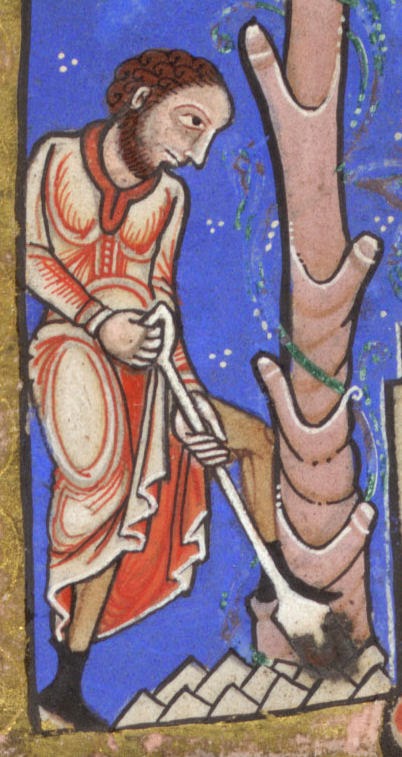 We are made/hard-wired to be connected to the Land and little gives as much satisfaction/fun as growing things.
Earlier in the week Anna and Jan began to sort out the garden room/summerhouse across the patio from the kitchen.I now have an area to paint,think,model and enjoy which is connected to the outdoors.Here is what is on the painting table- 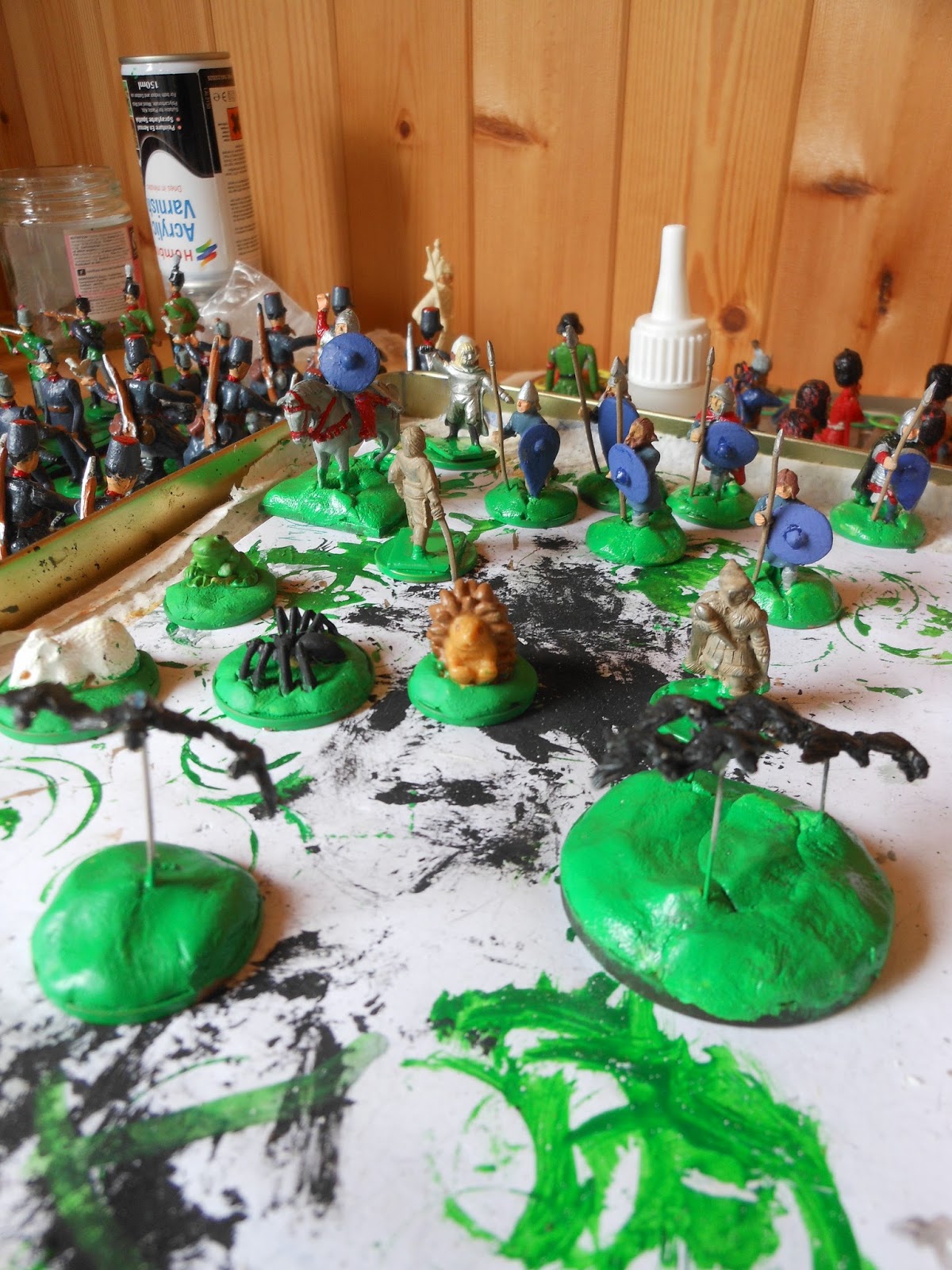 Some bases of flying bats,some Narnian talking beasts (old wee toys) and a biggish ( from a cracker?) spider.Finally some Minifigs dark age figures to be used as Laketown folk etc and a couple of Mythical Earth rangers. 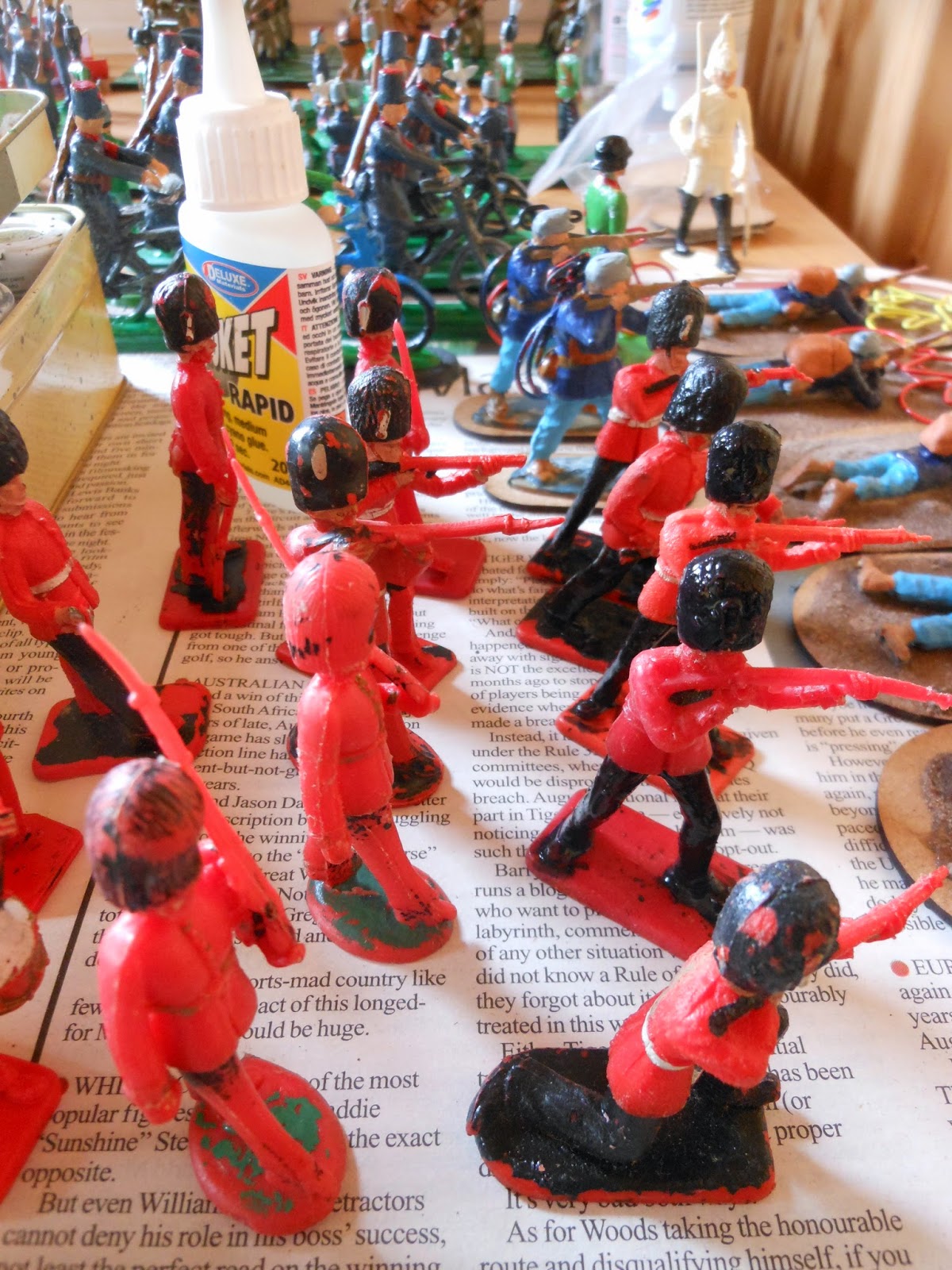 Now for some 54mm stuff- the mended Swiss cyclists in the background,some more Austro-Hungarian cycle troops with folded bicycles on backs and finally some Crescent etc  Army Red guards with the good honest feel of old toy soldiers.
It has been a good weekend, back to work tomorrow...
Posted by tradgardmastare at 17:49 3 comments:

Theses are in the shops currently and sold as paper clips-

I get mine at Tiger and Waterstons.
I combined them with some WW2 Airfix 1/32 Montain Troops ( with added rucksacks) to make some Austro-Hungarian (Army White) bicycle troops circa 1900 or so- 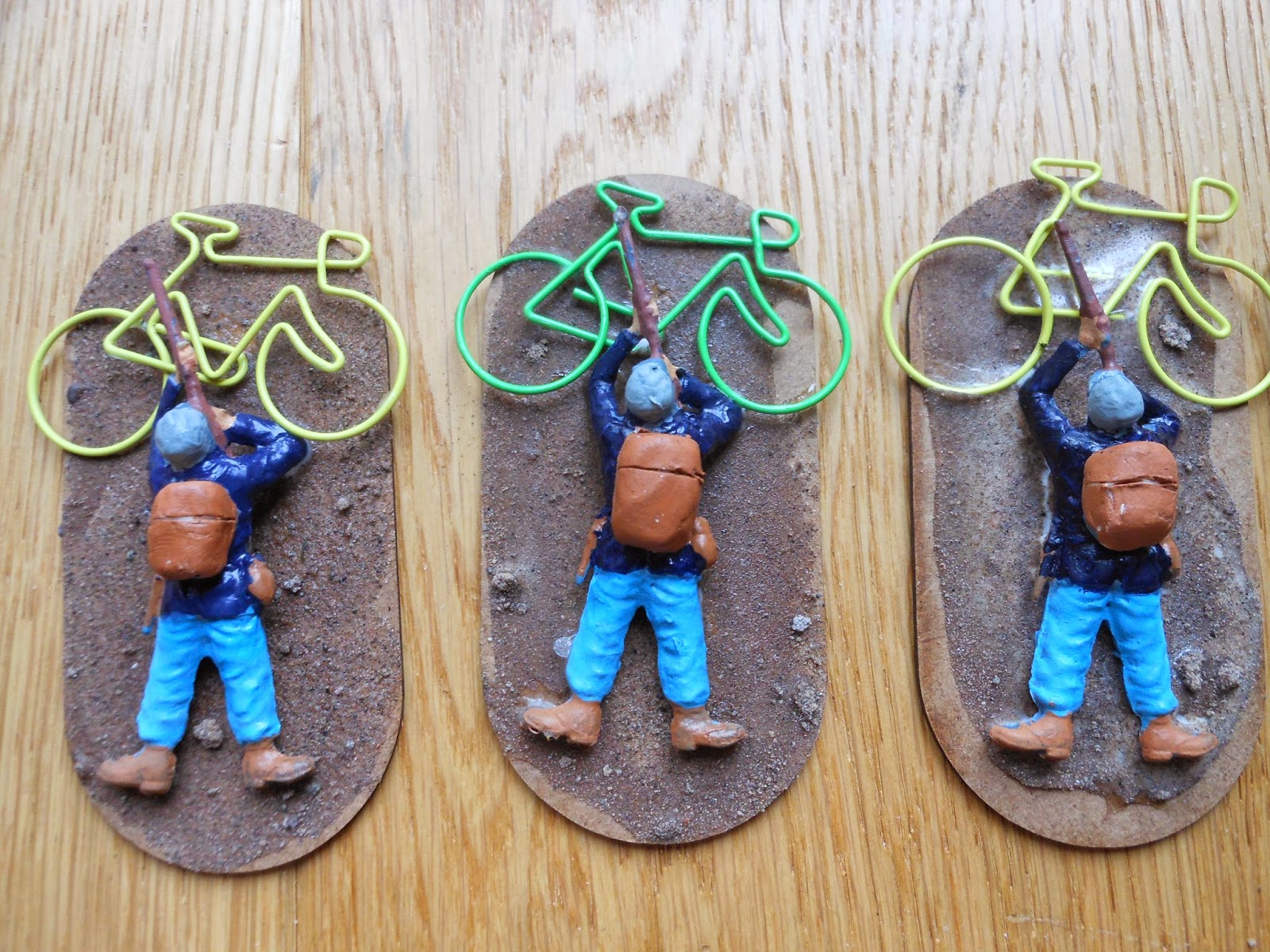 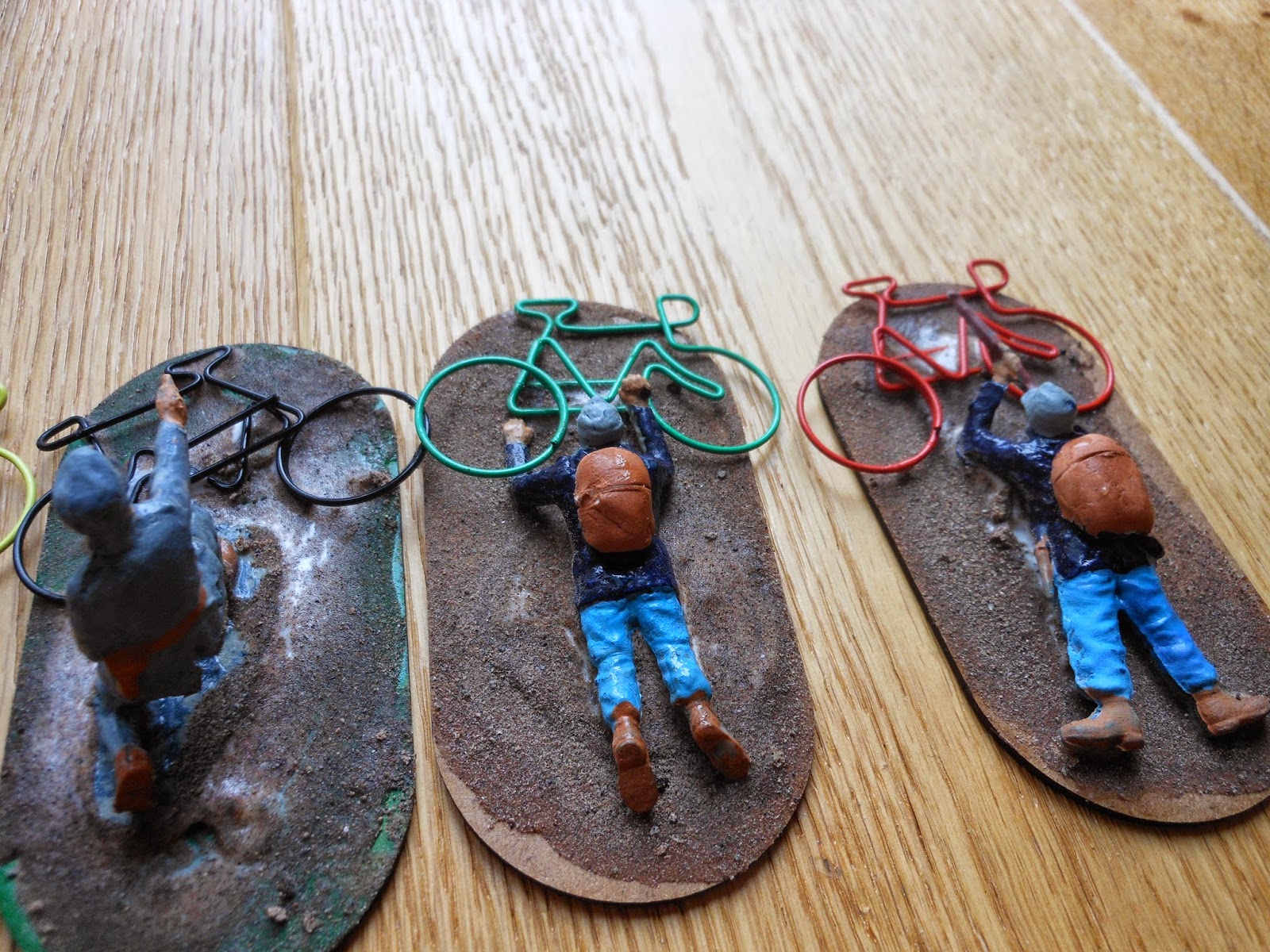 No doubt the original 1 to 1 scale ones would have been black but I have retained the colour of the clips for the sake of whimsy...
Posted by tradgardmastare at 11:29 5 comments: