A new term has begun and,as ever, we are treated to new jargon of an educational and annoying nature.My head is aflame with it all.I have a friend who is a Civil Servant.In speaking to him I have  gleaned that his work moves forward with some change but in a general linear way.For us in education everything is reinvented every few years, and,instead of building upon our experience we are cast down to start again as if from scratch.I fear the children suffer.My energy to teach and be creative is diminished by paperwork,jargon, methodologies and priorities which pour forth from our Leaders like propaganda in a 1930's Soviet tractor factory.
Anyway on a happier note the postman had brought a parcel for me today which contained the following-
On first glance before tea they look splendid to the eye and are written in a style which is user friendly and most readable.I purchased them with a view to 1938 VBCW gaming but with a vague thought about 1918 German Revolution and the Scheltrum range for the period. I hope to give them a solo test game at the weekend will let you know how it goes.
Posted by tradgardmastare at 18:30 5 comments:

Tricorne or not to tricorne ... 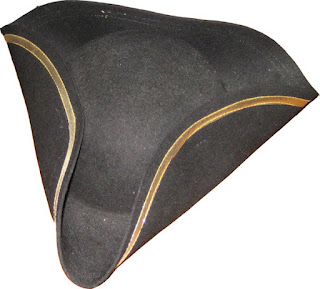 Or even the 20th century- 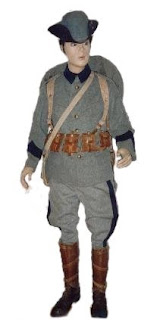 At the moment I have the situation where I am painting 18th century figures without them and planning for 2oth century ones  wearing them. Let me explain . Having finished ( for the moment) two forces for avbcw I am getting down to some neglected Old Glory Bordurian/Syldavian militia of the 1760s or so.Scruffy mountain marksmen who mean business and not a tricorne in sight! The other thing on the horizon is the forthcoming 28mm interwar Swedish tricorne clad figures.I can't wait to get some and am thinking through how to use them. I wondered about Norway being invaded as part of an attempt to return it to Sweden...
Any suggestions really welcome.Off to make Jan a Saturday morning cup of tea in bed ,see you later.
Posted by tradgardmastare at 08:00 7 comments:

A good read:back to my roots 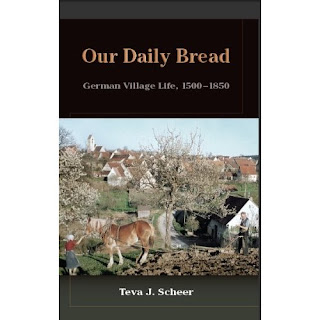 It is a fascinating read and takes the form of a fictitious village and it's story through time.The writer has collected information on German life and customs and woven it into a narrative history . Owners of imaginations,not to mention interested others, could  do far worse than giving it a read.
Whilst on the subject of good reads can I also recommend a book I really enjoyed when setting up a background to the Duchy of Tradgardland over five years ago ( gosh I can't believe how time has flown) and one I still dip into now and then-
"From Reich to Revolution German History 1558-1806" by Peter H Wilson
Anyway, enough of the recommendations,have a good weekend whatever you are doing.
Posted by tradgardmastare at 18:56 1 comment:

Evening all,as Dixon of Dock Green might have said...apologies for naff joke here.
Back to work now and it has come as a shock to the system! Yes I know I have long hols but...being back has rather exhausted me
Anyway down to hobby business.I have made a couple of flags for a vbcw for Local Defence Volunteers.Here they are- 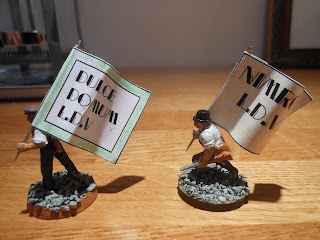 The one on the left ( Dulce Domum L.D.V) is the volunteer company raised by "Ratty" and his fellow riverbankers including the incumbent of Toad Hall himself. The one on the right (Nimrod L.D.V) is made up of grouse shooters and their ghillies and count as marksmen under the brigadier rules.The Liverpool free State  are coming over for a game tomorrow so my chaps above will have their first outing on the table!
Finally I have an idea for a small skirmish based  tricorne project that is a little different involving another Neu Tradgardland in a very far away place .More news of this when I have taken my idea a little further.
Posted by tradgardmastare at 19:35 2 comments:

Thursday Morning 6.30 a.m
It has been a sunny few days in the Duchy and a pleasure to be able to sit outside. Tuesday was the day the girls got their exam results and I am pleased to say they did well and got what they would have wished. Also on Tuesday my wife's aunt died.It was indeed a day of highs and lows. Yesterday my uncle and his wife ( my late father's brother) came over to look at old family photos from my mother's flat in order to put names to faces and stories to them too.Family tree matters were discussed and a great time was had by all. I went to bed my head spinning with the excitement of it all and thoughts of my ancestors on their farms in Baden-Wurttemburg...

I also had time and energy for painting. I am building up a Royalist opposition for the Liverpool Free State or my Welsh Nationalists. It will be made up of diverse factions (with Panzerkaput's flags for each Company) united in their loyalty ( to a greater or lesser extent) in Edward viii and his cause. I have some pictures to post- 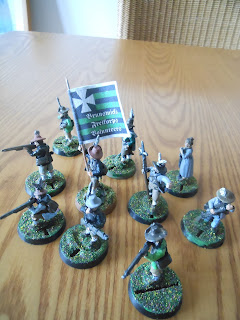 The above unit consists of estate workers from the estate of the Duke of Brunswick in Germany.The Duke, a cousin of Edward, is out of sympathy with the regime in Germany and has come to support his cousin in the civil war of 1938.They have been given  the flag from another unit to encourage them.Enthusiastic troops with little training counting as Green. 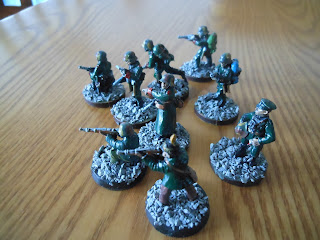 The Brunswick Volunteer Freikorps ( whose flag can be seen above) is made up of veterans from the Great War with ties to the Duke of Brunswick. They are equipped with a variety of uniforms and equipment.They count as Trained and armed with grenades and smgs. 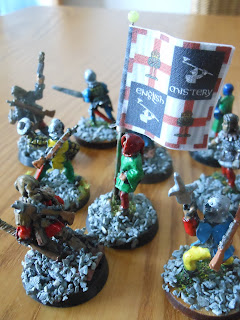 Finally a company from English Mistery. A shadowy organisation of "back to the land" monarchists.I have depicted them in a combination of medieval costumes with modern rifles to symbolically represent their mind set and for a bit of fun too.They are Green but add a plus one in hand to hand combat due to their antique but sharp ironmongery .
Posted by tradgardmastare at 07:03 3 comments:

First things first :to Michael from Sweden we are using the Brigadier rules from Solway Craft and Miniatures ( well worth getting) and the bicycles are Dixon Miniatures ww2 French Resistance figures.

A splendid day was had yesterday. The Wargames show was great and it was good to talk to faces old and new .I was particuarly taken by the 54mm AWI game and the Frei Korps/Latvian/Estonian 28mm game using Triumph and Tradgedy.Can I also say how welcoming they were to talk to and what an interesting collection of books they had for people to browse through beside the game.
I bought Dan Mersey's "Dux Belorum" rules ( a delight to read and anticipate playing) and Panzerkaupt's new sheet of right wing flags ( a visual triumph they are too) as well as a stile from Warbases.
After this we returned to my regular opponents for lunch and a VBCW game to christen his newly decorated wargames room. Here are some shots of the extremely hotly contested action- 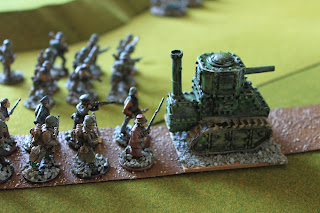 The Grumbly and District Choral Society Militia follow up the road in the lee of Ivor the steam tank...note the Llaniog T.A militia in the background. 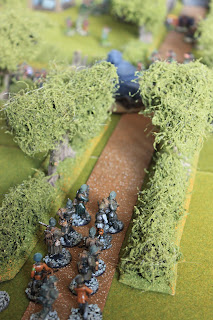 Ivor having fired his ammunition moved off the battlefield leaving the Welsh Nationalist infantry coming towards the enemy between the hedgerows. 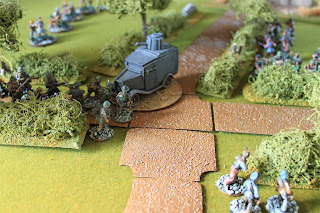 The final assault upon the Liverpool Free State troops .The game ended soon after with both sides leaving the field to lick their wounds and regroup for another day.A draw was declared.
The day continued with a splendid BBQ and my family coming over to join P&W's for a lovely evening ( punctuated by trips into the house to enjoy the Olympic excitement) which even featured good weather .A lovely day indeed.

Posted by tradgardmastare at 15:55 2 comments:

Friday 6.45 a.m.
Yesterday was my youngest daughter's fifteenth birthday- I can hardly believe she is that age already and how time has flown. The sunne has been much more prevalent here in Tradgardland of late and this has been accompanied by brief but intense rain showers.The garden is starting to move forward and we have been able to eat,read and sit outside- I even painted some figures out on the bench earlier his week.
Tomorrow sees the wargames show Claymore in Edinburgh. I have attended (as well as put on display games) for more years than I care to think of. The venue has changed over the years and it is now held in an excellent modern college building. I am looking forward to being inspired by the work others,to say hello to old and new friends and perhaps buy the odd item or two. I have the new Osprey rules "Dux Bellorum" on pre order to be collected from Caliver at the show. I may be tempted too by some additions/tweaks for my Welsh Nationalists. Today I will be painting up the last of the current lot in order to use them in a game at my regular opponents house after Claymore.Tuesday saw me scratchbuiding a mortar from card, a bead and the inside tubing of a pen.Why pay £8 when you can have a go yourself.If I finish it today I will post a photo later.Enjoy your day and may the sunne shine on you and yours too.
Posted by tradgardmastare at 07:01 2 comments: