The  man-orcs have been busy chopping down trees and collecting them for the iron smelting furnaces.After a tiring day all they have to do is to get  home along the forest trail- 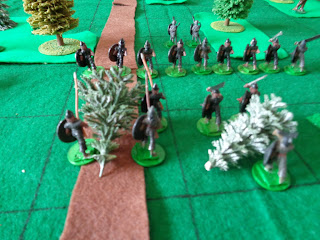 However some forest dwellers may have other ideas... 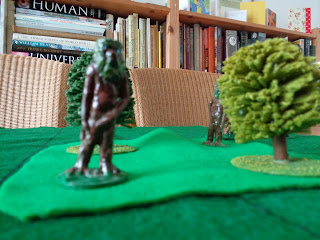 The enraged Ents and huorns have other ideas! This is the set up.The man-orc force has to get the timber safely off the other side of the table.The Ent force has to stop them! Here is the table layout- 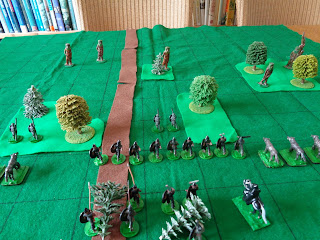 How to do this?

I would like to get this from Amazon De- 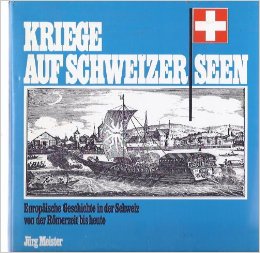 Any suggestions how to do this from the UK?
Posted by tradgardmastare at 18:09 5 comments:

All is quiet in the Duchy.My youngest finished the final exam of her school career today and will, results willing, go off to Uni post summer. Jan is sleeping as she is in the depths after Monday's chemo went ahead- hopefully she will begin to pull upwards again  towards the end of the weekend. I have been looking at my 1864 books I have already ,some bought in Denmark on holidays and some I purchased here. I have ordered this- 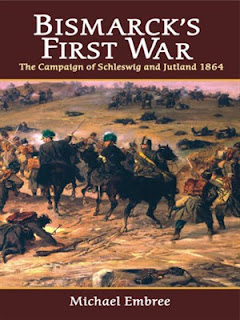 and hope it arrives for the long weekend which we have here.Does anyone know the book?I have read good things regarding it.
Posted by tradgardmastare at 20:02 2 comments:

A combination of the current 1864 tv series,my books on the period I have been leafing through and a forth coming book purchase has made my thoughts come round to gaming this period. Any suggestions for suitable rules?
Posted by tradgardmastare at 06:48 5 comments:

That was the weekend that was

Weekend has flown by and we are poised on the edge of another week. I have not had time to game as I had wished due to visitors etc. We did spend quite a bit of time in the garden and are pleased with how it is looking. Here is a flavour of it- 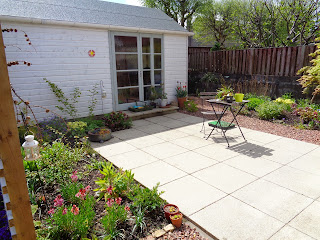 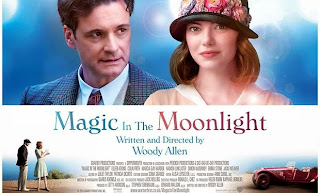 I have long enjoyed the films of Woody Allen and this proved to be great fun. Well worth a watch.
Jan's Chemo No2 did not take place last Monday due to blood counts. We are reasonably hopeful it will  take place tomorrow. Hobby wise this week I intend to try in spare moments to think how to define my Mythical Earth chaps in terms of Ros's rules and what amendments I might make. Hopefully I will game this next weekend. I also want to do a little reading about late 17th century gardens with a view to a little modelling...
Posted by tradgardmastare at 19:40 4 comments:

On a sunny morning in the Duchy I have just finished watching a splendid new drama (?) on BBC one,but more of that anon. Have you ever tried to get into a novel and try again and again only to discard it? This happened to me with "Johnathon Strange and Mr Norrel" which in the end I passed onto a charity shop and thought no more upon the matter.Until now that is when I gave the tv adaption a go and found it excellent.Who knows I may try the book one day...
Posted by tradgardmastare at 07:37 4 comments:

Anyone watching this and what do you think?
Posted by tradgardmastare at 18:06 9 comments:

I decided to use my new dragon (thanks Jim Duncan for your kind gift) to test out some gaming ideas I had been mulling over for some fantasy games to fight the world of Faerie impacting on a medieval kingdom. I used the following ancient rules on a gridded cloth-
http://gatheringofhosts.blogspot.co.uk/2015/05/a-summary-for-summery-test-game.html
with amendments as follows -
The Dragon had  12 (!) strength points,fire breathing- shooting with 12 dice (one less per casualty) and fought with 12 dice too (distributed amongst all units fighting it equally).The dragon could only be hit on a six.
Here he is- 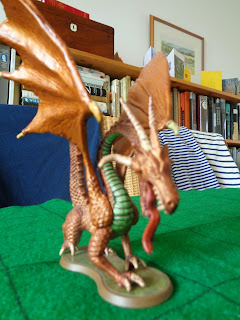 He was opposed by these stout fellows- 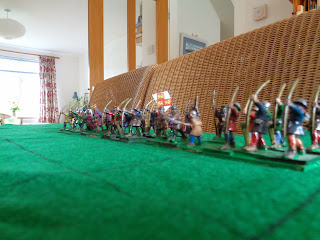 In both games the Dragon's breath did nothing hardly- very low dice throws,he failed to get to melee and was shot to bits before he could get stuck in.Perhaps he needs to have a flying move too and be more invulnerable to arrows? I wonder what to tweak next...
Posted by tradgardmastare at 17:10 4 comments:

Another Chelsea Sunday- with apologies to Marillion...

It's that time of the year again- the Chelsea Flower Show. It's Salute and much more for gardeners. Although we have never been, Jan & I are great fans,read the magazine/newspaper articles and follow the television coverage with great enthusiasm. Coverage begins tonight and we can't wait. Any other wargamers looking forward to it?
Posted by tradgardmastare at 11:10 2 comments:

I don't know who bought this for me around 1972 for the sum of £1.95. I have had it ever since despite movings and clearing outs of my books . It still sits near my computer as I type, on the shelf beside John Prebble's "Culloden" . I still browse in it regularly- 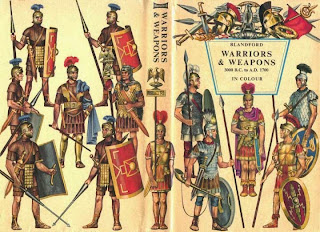 It introduced me as a lad to  exotic armies ,uniforms and periods of history. My interest in certain armies can be traced directly back to the illustrations I poured over as a lad- vikings in horned helmets and other joys. Jolly 17th century fellows with gunpowder barrels. I lapped them up. If you don't know it you must have a look...
Posted by tradgardmastare at 07:06 5 comments:

An email to Rob & a look on the Garrison webpage gave me the answer-
Thanks to everyone who joined in the search!
Posted by tradgardmastare at 16:35 1 comment:

I wonder if anyone could identify these- 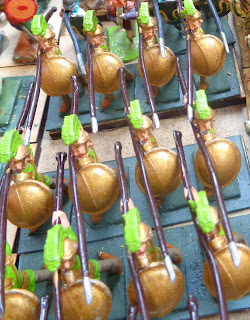 They have long trousers. Can anyone tell me what they ancient soldier ( clumsily worded but you know what I mean) they represent and who made them? Thanks!
Posted by tradgardmastare at 18:40 9 comments: 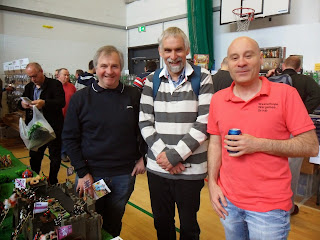 The chap in the middle of the photo is me,to the left my regular opponent of nearly 30 years standing and to the right a member of http://westerhopewargames.blogspot.co.uk/ whose club took the photo.They were really friendly chaps who put on a great medieval game (54mm and cost only £60) which can be viewed at the above link.We really enjoyed talking to them .
It was good also to to talk to-
Tom, Bill about his and Colin's superb WW1 in East Africa game,Richard,Steve Rimmer and his excellent WOTR game not to mention generous handout and Chorley cake etc,Hugh from my Edinburgh University Wargames Club days in the 1980s,Jim D and some chaps from Slingshot/Society of Ancients. Add some interesting games,other chats and traders and a most enjoyable pie and you can see what a great show it was!
Posted by tradgardmastare at 06:35 1 comment:

Is this chap a Polish Pancerni or what? Minifigs? 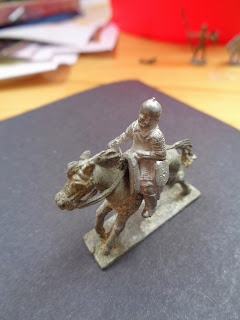 Below is a Lamming (?) Roman general  which I will use to command my new Romans. What make is the other chap? 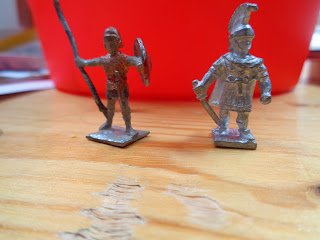 I am a most fortunate chap...

Martin Rapier wrote this recently on his blog-

A sad feature of getting older is the increased prevalence of your contemporaries dying, and in the case of wargaming, this also means their collections being passed on by the bereaved families. In some ways it is quite comforting to think your 'stuff' living on and continuing to be used by people who appreciate it.In this vein I recently acquired some figures from the estate of the late Robert Plumb, 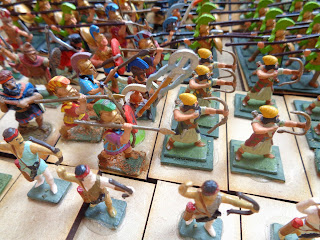 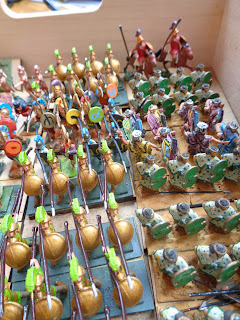 Any thoughts on manufacturers greatfully recieved. 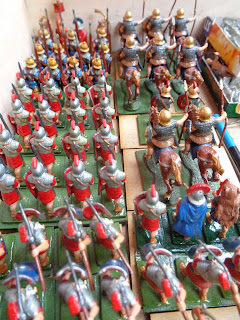 I am indeed a lucky fellow ! See these next when I have sorted them out into armies,finished bases and added spears on my Pavilioned in Splendour Blog in action- soon I hope!
Posted by tradgardmastare at 13:31 5 comments:

Anyone off to Carronade in Falkirk tomorrow? I hope to do so .
Posted by tradgardmastare at 16:40 1 comment: 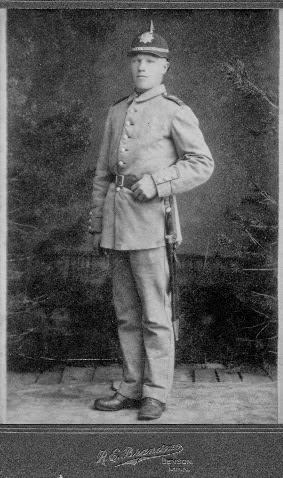 I have been painting Norwegian troops and Scotland based Rifle Volunteers to oppose the Norwegian landing. I t has been fun to research the uniforms and potentiality fight some battles over terrain from my neck of the woods. I envisage regulars coming by train over the Forth Rail bridge as reinforcements or marching from Redford Barracks to battle. I have even managed to raise a few volunteer cyclists too. I am suspending disbelief and enjoying planning some games. The "One hour wargames" book has arrived and is an interesting read and I will use the scenarios as game ideas too.
Posted by tradgardmastare at 11:56 1 comment:

I have been painting and preparing 1/72 Airfix chaps of various vintages.It is part of a project using the figures I was given by generous Bloggers some time ago and pertains to the recent previous posts.
Some have plastic rot and fall apart at a touch of the finger!Two questions - can I use them if I cover them in glue ( if they don't shatter when working with them)  or something  and if I do will the rot spread to other untainted figures? Sorry if I have asked this before but I can't recall what I should do...
Posted by tradgardmastare at 15:59 8 comments: 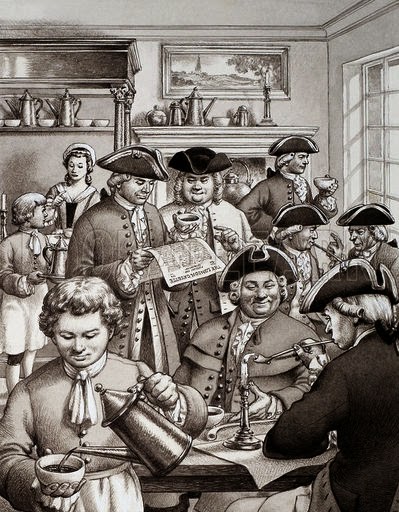 Happy May Day from all at The Crumpled Kobold coffee house in Tradgardstadt! Have a good weekend ( be it two or three days) one and all when it comes.
Posted by tradgardmastare at 07:20 4 comments: