The Volare Cantare Air Attaché is in Albion today. He has come to see the new aeroplanes and their dashing pilots. Albion Air Force we salute you! The Attaché was painted by Mark Man of Tin and was a kind and unexpected gift . This is the Attachés first time in public in role and his uniform has been greatly admired during his visit. 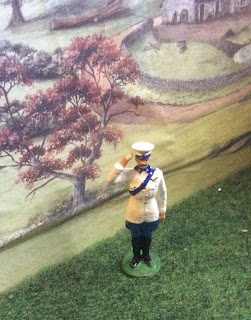 The planes were bought built from eBay and will serve in my interwar gaming and Vbcw,they are 1/48 scale and will look splendid flying over the tabletop - 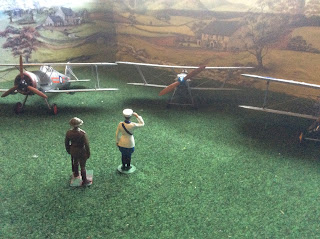 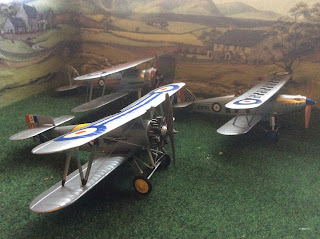 Posted by tradgardmastare at 09:47 13 comments:

Personalisation in Wargames- the Homeguard Platoon

Decided to customise/ personalise my Homeguard Platoon today. Here they are on parade- 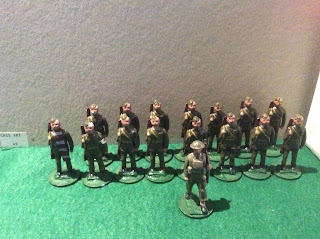 Now for a closer look at the characters, from left to right...
Youngest platoon member ( - 1 in shooting, hand to hand and morale) the platoon medic ( +1 to saving throw for any figure if base to base contact with medic) Platoon Officer ( + 1 to morale, 50% chance of indecision when giving orders) Platoon 2ic the sergeant ( +1 to morale and on dice Officer throws to give orders if in base contact with him) and finally the the old soldier ( +1 in hand to hand combat)
I added a paper bayonet to the old soldier’s rifle and a paper scarf to the youngest member of the Platoon. Figures are all 54mm homecasts (bought) apart from the Officer who is a Britains hollowcast with spares rifle arm. 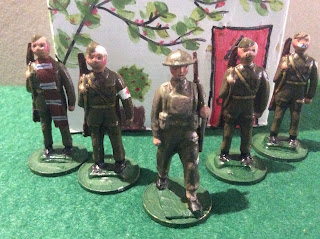 Posted by tradgardmastare at 13:07 13 comments:

These fellows came to me via Tim Gow ages ago. They have lain in a box not forgotten but needing a mission. I liked the way they arrived with bent and twisted fuse wire ( my father always had loads of wee cards with different sizes of fuse wire in his tool bag- rarely used but there if needed ) bowstrings   on bows which I teased back into shape. I liked their simple lines and classic paint job . Ok, I had no suitable army for them ( I think they may be Byzantine but I am unsure) but they could wait..
Here they are removed from  plywood basing in twos and ones and placed on mdf ( basing zeitgeist) in groups- 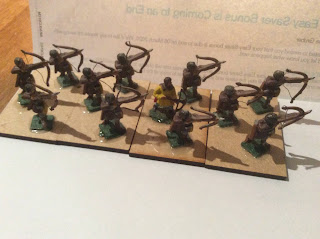 I will leave the paint job, gloss varnish them and secure bowstrings with super glue. Simple basing ( add rocks / debris , the jury is out) and they will serve as 16th century woodsmen in a forthcoming 16th century battle between Northland and Southland. I hope they are looking forward to battling once again...
Posted by tradgardmastare at 08:01 9 comments: 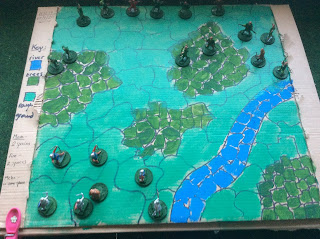 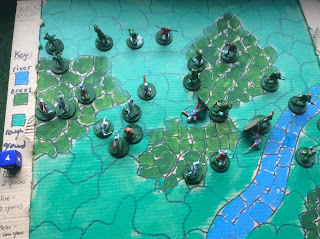 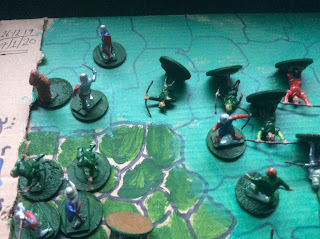 Posted by tradgardmastare at 15:05 9 comments:

On the painting table today 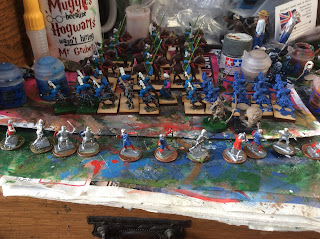 Trying to enthuse myself  to do some painting. A combination of things to do in real life and a cold/fluy/annoying thing I can’t shift. Listening to The Cricket Social whilst painting some Airfix chaps working for The Sheriff of Nottingham this morning. The painting table has,apart from the Airfix chaps, Minifigs and Dixon Ottomans, Scout homecasts and finally a Nightfolk goblin archer with spectacles and telescope beside some enigmatic mushroom people.
Posted by tradgardmastare at 11:00 13 comments: 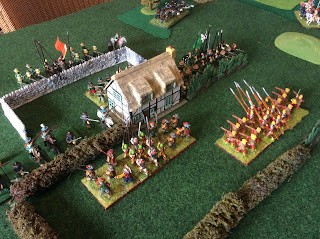 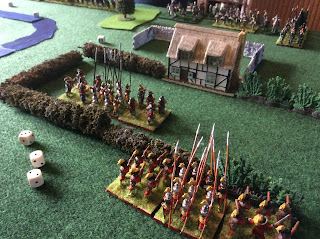 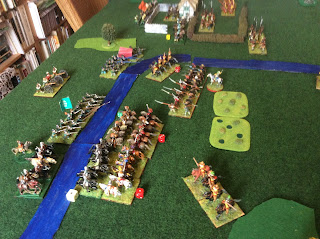 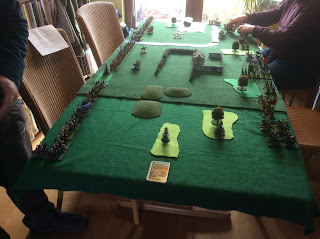 Posted by tradgardmastare at 08:01 10 comments:

The big table is cleared and the scenery placed. The commanders have their mugs all ready... 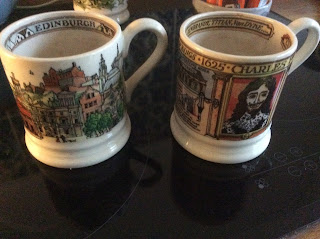 Even the essential Airfix cottage is to hand , play begins in an hour... 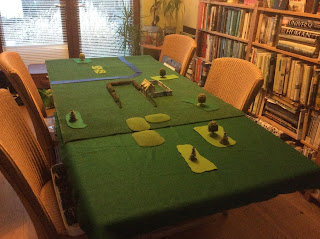 Posted by tradgardmastare at 10:05 6 comments:

Last year I was fortunate to acquire some of the late Eric Knowles Ottomans. I was delighted to get these due to their provenance and also for the chance to bring them to the wargames table. I began them between Christmas and New Year. I am currently working on the figures in the photo below here pictured with the box they came in and with what I assume are Eric’s painting instructions. I will follow these as a tribute to him. Sadly they are the only instructions I have found so far. 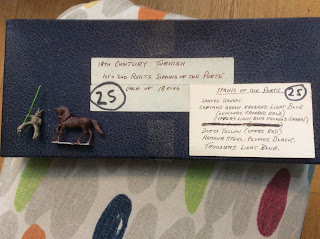 Below are the Tartars I began with. They have telegraph pole lances which I like but are not everyone’s cup of tea. They are nearly completed. They will be varnished with more gloss varnish/p.v.a and based for George Gush’s Renaissance rules. Basing is simple and plain green in old school tradition. The tartars are colourful, shiny and look ready to ride rings around any opponent... 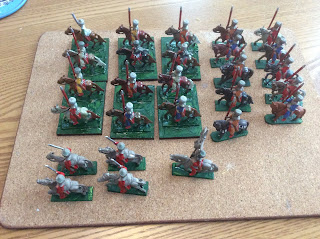 Posted by tradgardmastare at 09:30 11 comments:

Not Airfix as we know it Jim... 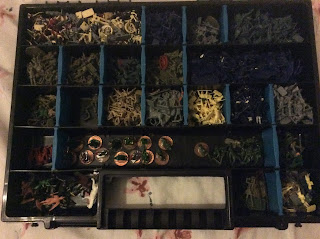 The above picture shows the hoard sorted out into types and periods. The below photo shows some figures that I was intrigued about. The bottom row are soft plastic with an Airfix fellow of 1960 and 1973 for size comparison. They remind me of Herald 54mms and I think they might be cheap smaller pirate copies.The top row are hard plastic. I wondered if they might be made by Triang ? 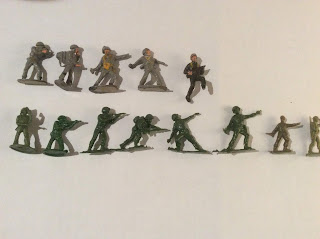 Posted by tradgardmastare at 08:21 7 comments:

The new year has arrived here in the Duchy. The hours leading up to the new year were filled enjoyably by watching “ Bohemian Rhapsody “ with some of the family. I never stay up to midnight and so awoke to the new year in the early hours. Today l will continue the enjoyable job of sorting out my recent  Airfix acquisitions . 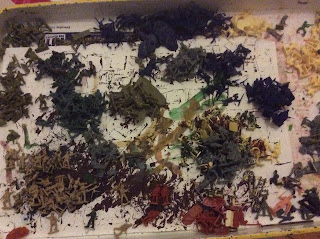 I got some wee screw/ nuts n bolts sorter boxes in Aldi’s yesterday when getting some essentials late afternoon. They will come in handy for storage of the sorted figures and eventually for them when based and painted. The sorting began...
I am fortunate to have the Osprey sized book by a French chap ( ?) on the Airfix 1/72  figures which incidentally is always a fascinating read. This was on hand in case any oddities were found.
The figures I hailed as old friends were the 1960 designs as opposed to the 1973 ones. For example I had never handled the 1973 French Foreign Legion before and found them long and thin compared to the ones I enjoyed as a boy. Equally I didn’t really take to some Napoleonic chaps in bearskins I had never owned. However it was a joy to be reunited with the Robin Hood and Sheriff of Nottingham sets especially the personality figures like Friar Tuck and Robin himself. The favourites so far were the 1960 ww2 Germans, Afrika Korps and 8th Army. They spoke to me of the 1960s and boyhood games morphing into Wrg’s platoon action rules or Battle , Practical Wargaming  played over Bellona vacuum scenery. More sorting to do and then I will post more on this. Figures will be used in the Portable Wargame battles and some Featherstonian close wars games. Finally what the best way to remove old paint from Airfix chaps?

Posted by tradgardmastare at 08:25 12 comments: