Anyone got any of these chaps to sell?
Posted by tradgardmastare at 18:03 3 comments:

Yesterday after school I went to a C.P.D  (continuing professional development or teaching for teachers) event locally. Often CPD  is not the most inspirational thing in life but yesterday's was different. It was about WW2 in Dunfermline, the role of the Home Guard and Polish troops here in the War. The talk centred round detailed maps of the defence plans for here if an invasion had come and the actual remains left such as concrete road blocks and trenches.

I had heard some it before but  there were fascinating new details such as the Home Guard officer who built an armoured car (sadly no pictures) out of a Buick car. I left inspired and greatly enthused.
This morning I was looking through old photocopies and found my copy of all Charles Grant's Meccano magazine articles  on WW2 wargaming.- " Introduction to Battle" ,the first of which was dated May 1968. The two things combined in my mind and an idea of an idea began to form for a new project to celebrate the 50th anniversary of the rules and combine  it with a Grantian ( if I can conjure such a word up)take on modelling local buildings. An old school homage to a battle that never happened.

Posted by tradgardmastare at 18:06 4 comments: 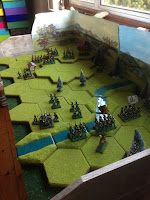 I set up this game today to play using "Developing The Portable Wargame" ancient  rules as per the post on ( http://gameofmonth.blogspot.co.uk/2017/12/1759-minor-affair.html ) 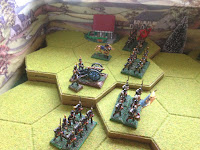 I used layers of the Hexon to add hills. 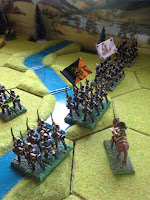 Figures used are Jim Duncan's Swedes split into two forces. I was pleased with the look of the thing and it will be able to be kept up over the next few days.
This afternoon I prepared some Copplestone Hobbits for painting.

Posted by tradgardmastare at 16:28 4 comments: 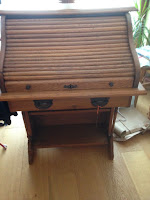 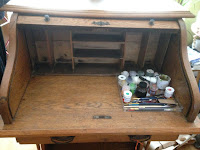 Spotted in a local antique shop and bought as a writing/painting desk- can't wait! 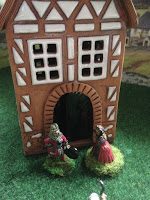 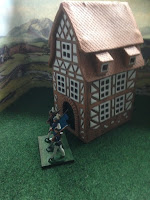 Charity Shop  find (£2.99) consisting of a terracotta house (one can pop in a candle and illuminate it) here displayed with 28mm and 40mm figures.
Posted by tradgardmastare at 17:11 16 comments:

Small number of fantasy figures per side rules suggestions sought

Any recommendations welcome. I have tried Songs of Blades... in the past and can’t quite get into it.
Posted by tradgardmastare at 16:27 14 comments: 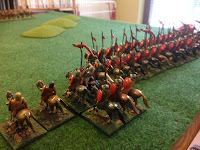 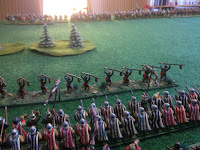 My view from behind the Carolingian's line.My plan was to take the hill with cavalry and the wood with staff slingers whilst the spearmen advance. 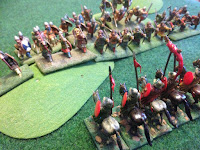 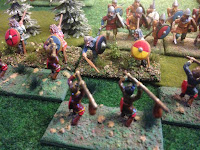 The cavalry take heavy casulties from viking bowman and their general is killed in combat leading to demoralization. Meanwhile the vikings pour through and round the wood leading to the surviving Carolingian general's command becoming demoralised and a viking victory ensued. 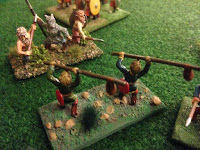 Only Carolingian success were the above  staff slingers who won every combat in the game holding berserkers at bay and eventually killing them and some viking bowmen before leaving the battlefield unscathed. In honour of their bravery I have repainted their shields so they will always stand out on the battlefield.Well done chaps!
A most enjoyable game and a worthy victory for Phil. I look forward to a rematch soon I hope!

Posted by tradgardmastare at 17:32 2 comments: