Memories of times past etc 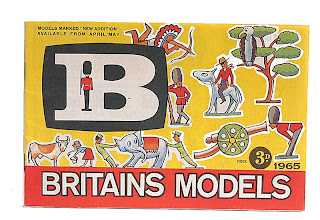 Hello I'm back-back to work and on the road to feeling better- I hope.Work is very busy and I have had little time or energy of late. I have begun some ECW 54mm figures for a forthcoming project- details later .

I am enjoying two play by email/photograph/map games- one set in ww1 using FLW rules and another using Stuart Asquith's Big Wars. The latter involves being sent photos of what one's commander  can see on the table  and sending orders from this information.

Since I've been away from blogging I've had a conceit to try and do some 1930s civilian militias in 54mm for a very British Civil War circa 1938. My memories of my Wm Britians catalogue 1964 or so gave me hope- farmers with shot guns,mounted figures in hunting pink and suitable carts.

However looking at their current range on the web I see I am well out of touch! No farmer with shotgun ,no fox hunters etc! I fear I should have realised time has indeed moved on...
So any ideas for 1938 in 54mm eagerly sought- thanks in anticipation
Posted by tradgardmastare at 19:56 2 comments:

It is Monday morning in Tradgardland and the family have left for work and school. I remain behind confined to quarters. Unplesant painful  symptoms in the early hours of Sunday morning meant an out patient hospital visit. I have now managed to get a bladder infection on top of last week's drama!Not feeling up to much and off work for the first time in absolutely ages! 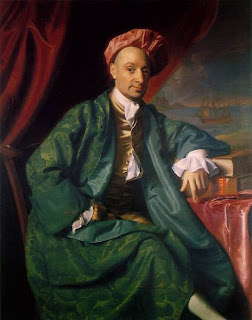 Little energy to read or plan and sadly no gaming or painting..hopefully the antibiotics will kick in soon.
Posted by tradgardmastare at 08:45 10 comments:

Life and love and happiness...

A rousing video for you all! It has a lot to answer for  in terms of  sowing the seeds of my interests to this day.Sit back and enjoy !
Posted by tradgardmastare at 08:21 3 comments:

A quiet day in the Duchy and a challenge... 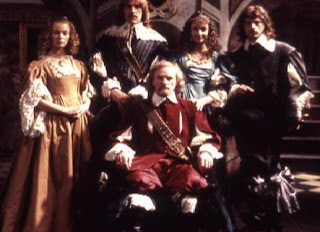 I have had a quiet day today doing very little, mainly in bed. I have enjoyed the cricket on Radio 4 LW with the ever engaging chat that is such a joy to listen to. I also indulged  myself by watching series one of "By the sword divded" that BBC classic tale of the ecw.I also  have the second series on loan awaiting me tomorrow...
A final thought how many films can you name either set in the English Civil War or Thirty Years War.
Here is a starter- "Cromwell" "The Last Valley"- now over to you

Posted by tradgardmastare at 17:49 9 comments:

Perhaps you wondered why my forthcoming game didn't materialise?Let alone the day out in Edinburgh to see the Admiral Cochrane exhibitionI had promised myself. Read on-
Just back from hospital where I was kept in a day and a half with nonemptying bladder probs (first time for everything!) and didn't get much sleep as I was on the Ear ,Nose and Throat ward where the chap opposite snored continually for 12hr.Don't really feel up to setting up a game at present so bear with me.It is great to be home!

Posted by tradgardmastare at 15:33 13 comments:

Hour of the wolf... the night before the battle 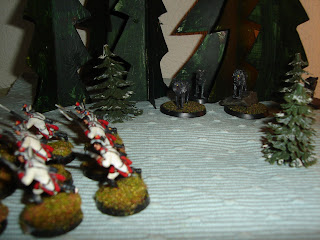 The Imperium forces hurry towards their fellows unaware that they are being followed through the forest... 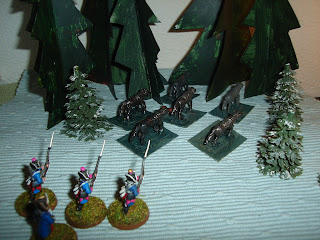 Meanwhile, in another part of the forest, Tradgardland sentries see the wolves off with a few well aimed shots...
Posted by tradgardmastare at 17:19 2 comments: 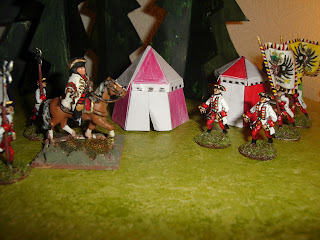 In the Austrian camp,located upon the Tradgardland border,the General has gathered his officers.A battle is expected any day. Imperium scouts have located the Duchy of Tradgardland  forces.The General tells his officers to prepare for battle in the morning... 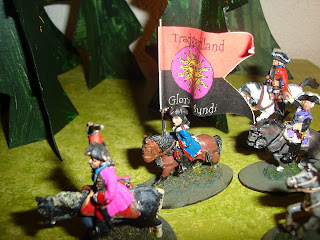 Meanwhile the Duke of Tradgardland and his staff gallop through the woods.They are aware that the Imperium forces are near at hand.The Duke tells his officers to be ready for battle upon the morrow...

Dear reader half term has begun (hurrah!) and I hope to game this scenario over the coming days.As ever you will read of events as and when they happen.A good weekend to one and all. God save the Duke!
Posted by tradgardmastare at 18:00 4 comments:

More upon the double armed man... 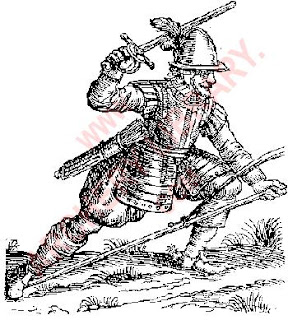 I have tried to find out a little more about the double armed man today. I have emailed the Royal Armouries and await their reply with interest.I was fascinated by the above picture with the bow clipped onto the pike .I found this account of Neade and his book- be prepared for some interesting information-

"In 1625 William Neade, archer, published a book called the 'Double-armed Man,' which explained a new exercise combining the use of the bow with the pike. This appears to have been performed before the king, who, though approving the invention, took no steps in the matter till 1633, when, after sundry petitions, he granted a commission to William Neade and his son to teach the use of the bow and pike together, directing the justices, &c., in England to do all they could to assist Neade, and strongly recommending the exercise to the 'chiefe officers and others of our Trayned Bands.'[60] Two years later Neade petitioned, saying that the king having approved the use of the bow and pike together and authorised him to teach the same, he had laid out his whole estate of 600l. and incurred debts in furnishing himself with ammunition for the purpose, but that owing to the evil example of the city of London, this service is wholly neglected, and he prays that the Lord Mayor may be ordered to direct the trained bands to furnish themselves with such ammunition, so that the petitioner may sell what he has provided, and that delinquents who refuse may be proceeded against.[61] It does not appear what was done on this petition, but probably some steps were taken, as in 1637 Neade petitions the Council that some reward may be given to encourage those who practice the exercise of the bow and pike together, and he mentions that this exercise was performed by 300 of the Artillery Company before his Majesty.[62] Two cuts are given from Neade's book, to show his method of combining the use of the bow and pike. (It is curious that the figures, which are those of foot soldiers, have their heels adorned with huge spurs.) This invention of Neade's was many years too late to become popular the musket was rapidly proving its superiority, and the bow falling more and more into disuse; though, in the same year, a commission was issued, ordering the statute 33 Henry VIII. for the maintenance of archery, and two other statutes of 12 Edward IV. and 13 Elizabeth, respecting the importation of bow-staves by merchant strangers, to be enforced.[63] In 1638, Lord Arundell and Surrey says: ' I hold it fit that instantly some quantity of bows with offensive arrows should be poured into our bordering shires of Cumberland, Northumberland, and Westmoreland (already used in archery), and their old arms of spear and jack restored.'[64""

News to me -and you probably too! Anyone I know they were not used in the ecw but they might have been! I hope to have more  information soon and a figure or two within the week. 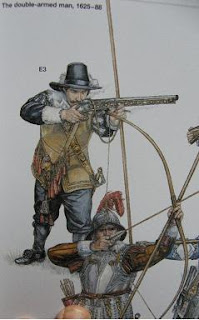 Posted by tradgardmastare at 19:17 11 comments: 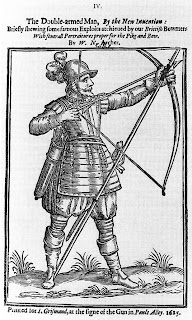 Can anyone help me with information/a photograph of the "device" which allowed the man to fix his bow onto the pike or vice versa? I have never seen one  and am hoping to model such a figure.Information about this would be really helpful- thanks in advance.
BTW a big thanks to Jimho for pointing to me to the 1780 book.
Posted by tradgardmastare at 17:33 11 comments: 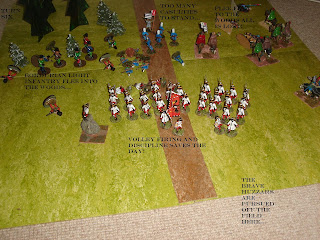 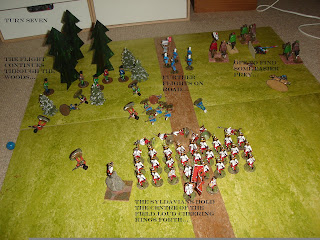 And so ends another battle in the continuing warfare that has been going on for centuries. The Bordurians leave the field to lick their wounds but they will return another day very soon indeed...
Posted by tradgardmastare at 19:57 6 comments: 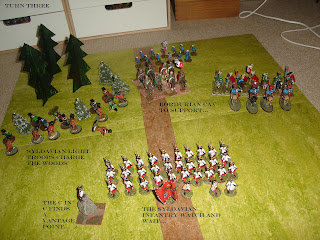 Good evening gentlemen! I trust the day went well. Here is how the game continued,more later... 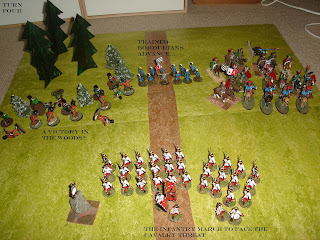 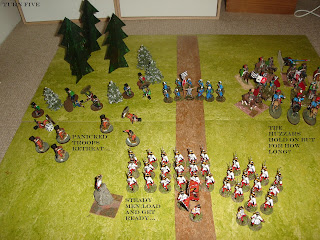 Please click on the photos to enlarge them and read the comments.
Posted by tradgardmastare at 18:17 6 comments:

The resulting battle from yesterday's Syldavian/Bordurian scene setting was fought this morning and I am uploading the first of the  images here. Rules were based upon Fitzbadger's "We don't need no stinkin rules" concept- in other words simple ,held in the head (based upon years of experience and many different rules sets) and not upon paper and most importantly fun! A small game on a small surface but great fun.Please click on the photos to enlarge... 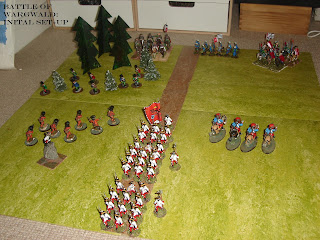 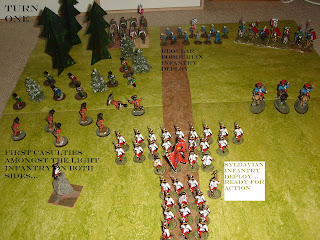 Posted by tradgardmastare at 11:14 7 comments:

Somewhere in the border  country that lies betwixt Syldavia and Borduria men are moving stealthily... it is not only the wolves on the move this season.
A local peasant has brought information that Syldavian troops are marching through the vicinity. The Bordurian local commander rewards him well for the information- no money sadly handed over but the peasant's  hovel will not be torched.
Soon the Bordurian commander is gathering his forces and an ambush prepared.All that is needed now is patience! 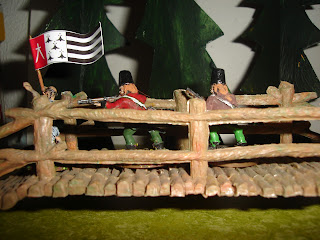 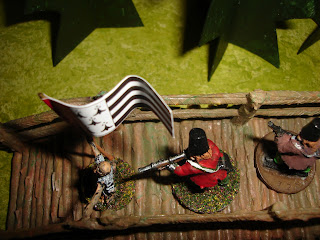 I hope to finish the tabletop encounter tomorrow...
Posted by tradgardmastare at 10:16 5 comments:

I was in Edinburgh on errands this afternoon. I stopped off at Wonderland (the model shop not where Alice lives) on the way back to the station. I was most taken by the 1/72 and 54mm plastic boxed figures. I had a good rummage around even opening boxes to compare hardness of plastic. I was particularly taken with the variety and choice in 1/72 esp the Streslsi (?) Russian make figures. In 54mm I went in looking for AIP to convert for FLW but nearly came away with HaT celttabrians!!!
In the end I found a sale item I could not resist - ECW muskeeteers for under £4. The Chap in the shop mentioned the company had gone burst and no more would be coming in- helpful I thought. However I am sure there are plenty more options for figures- any suggestions chaps? 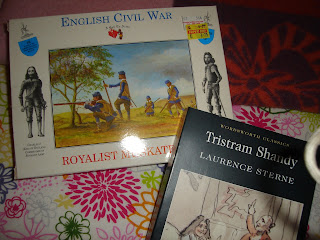 Finally got a book for the train- all in all a useful trip to Town.
Posted by tradgardmastare at 19:33 2 comments:

I am trying to find details,illustrations and even rules  but so far only a few enigmatic references are to be gleaned by me...
I am keen to know more about Helwig, Master of Pages to the Duke of Brunswick in 1780 and the game he invented. Can you help?
Posted by tradgardmastare at 08:27 5 comments: