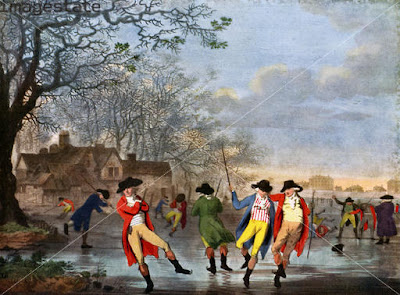 Set off to work at 6.25am through deepish snow. Train arrived only two minutes late. Got off at Dalmeny and walked to school - found it in darkness.My wife phoned me on mobile to tell me my boss had been on the phone to say school was closed today. Turned tail to walk to station and got train home and enjoyed WSS booklet in comfort in warm carriage on the way. Back by computer by 8.15am.Girls school closed too. Hope you all have had a safe and not too frustrating day so far!
Posted by tradgardmastare at 08:31 4 comments: 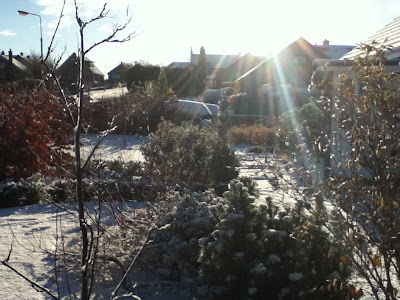 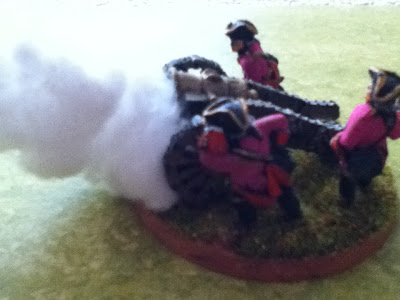 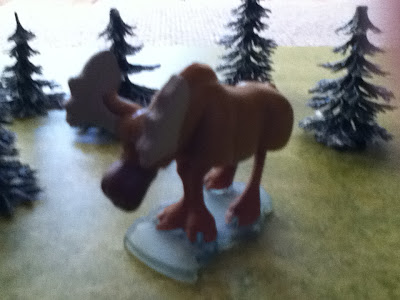 The first Snows have come to The Undisputed Valley situated on the border of the Duchy of Tradgardland. The elk can be found within the dense forests and await the coming winter with stoical acceptance...

The Ducal artillery practice in winter quarters for the coming struggle with the Imperium by firing a few rounds, the smoke rising upwards in the chill air.

Here in Dunfermline we have had the first real snow of winter.Sledging and mini snowman making has occurred not to mention photography in the chilly air. Thankfully the snow arrived overnight the evening after Jan's fourth chemo or we might have had travelling probs over to Edinburgh. Chemo number 4 went as well as can be expected and Jan is very tired but not in too bad form . 5th out of 6 will hopefully take place on the 17th December. We move onwards and upwards...
Posted by tradgardmastare at 16:36 4 comments: 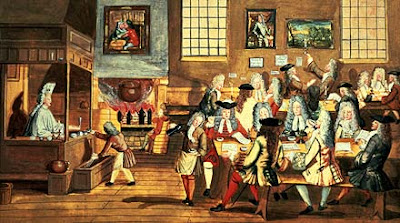 Gentlemen
For those who belong to Society of Daisy can I reccomend a newly posted file there:
"The_Gentlemens_Entomology_Club.pdf
A Roleplaying Game of Wine-Drinking, Boasting, Beetles, and Some Incidental Rationalist Philosophie"
I have just read it upon the train home tonight and I feel it is something many of us at EvE might enjoy...
Do look it up- you won't regret it!
Posted by tradgardmastare at 19:26 2 comments:

A real Imagination- if you know what I mean... 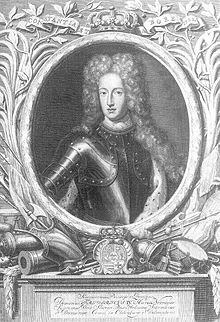 One of the chaps at my local club in Dunfermline has begun a Great Northern War project and is commencing collecting my fave army of the period – the Danes! He intends to use Under the Lily Banner or perhaps Basic Baroque Impetus….

My initial reaction was enthusiasm then I thought better of it and put the brakes on. However after considered thought I have decided to raise a few units – enough for an afternoon’s entertainment upon a smallish table.
My initial reaction was to go for the Swedes- I have loads of information and a long standing admiration for these Predestination driven Calvinists under their wonderful King Karl XII…
However I have finally been “won over” to the side of a real Imagination in the shape of the Duchy of Holstein-Gottorp. Let’s meet the Duke ….

Duke Frederick IV of Holstein-Gottorp (18 October 1671 – 19 July 1702) was Duke of Schleswig.
He was born in Gottorp as the elder son of Duke Christian Albrecht of Holstein-Gottorp and Princess Frederika Amalia of Denmark. He was married on 12 May 1698 to Princess Hedwig Sophia of Sweden and they had a son, Charles Frederick, their only child, who eventually fathered the future Tsar Peter III of Russia..
He took part in the Great Northern War and was killed in the Battle of Kliszów in Poland.
According to Robert Massie's Peter the Great: His Life and World, Duke Frederick quickly befriended his brother-in-law and first cousin, King Charles XII of Sweden upon arriving in Stockholm to marry his cousin Princess Hedwig Sophia. His visit made such an impression on Swedish society that the excesses surrounding him and the King earned him "the Gottorp Fury" as a nickname. Duke Frederick and King Charles regularly participated in wild festivities, drinking binges, and outlandish pranks. Generally, Duke Frederick's influence was the blame for the King's "reckless" lifestyle. There were even rumors at the time that the Duke sought to kill the King and usurp the throne. As it happened, according to Massie in the aforementioned book, the 17-year-old King Charles, in the summer of 1699, pushed himself to an unbearable point of excess and vowed never to touch another drop of liquor again. Apparently, writes Massie, the King stuck to beer thereafter, and even just drank beer when he was either wounded or post-battle. As for his relationship with his cousin Frederick, they remained on good terms, so much that King Charles gave him military assistance to defend Holstein-Gottorp from Danish invasion. (thanks to Wikipedia…)
P.S Perhaps one day I will raise the Duchy of Tradgardland’s army of 1700 to provide oppostion…
Posted by tradgardmastare at 08:22 2 comments: 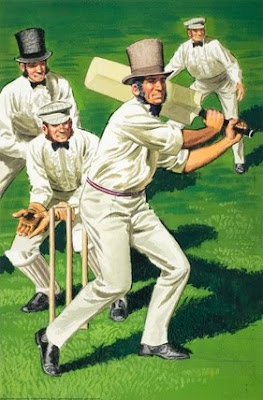 The men of the undisputed Valley ( wearing some outlandish headgear- it will never catch on I feel...) are playing a rather unfair looking game in surprisingly decent conditions for November...
Posted by tradgardmastare at 09:24 7 comments: 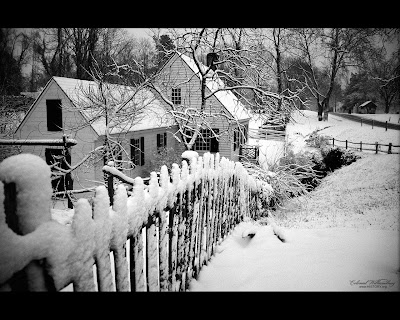 Winter has come to the Duchy of Tradgardland and also Fife...
Sadly no crisp snow but we have been lashed by rain and wind this week. All is sodden,garden like a quagmire and the guinea pigs ensconced in the garage much to the harvest mice's delight I fear!

The trip to the consulatant went really well. She said Jan could not be "in a better place" with regard to how she has responded to treatment! Glorious news indeed as we gear up towards Chemo 4 out of six in around 12 days! We are both delighted and feel surrounded by the thoughts and prayers of many...

I am rather tired these days and all is busy with work and family at the moment. I do bits and bobs of hobby stuff and try to resist buying new lead to add to the already vast unpainted mountain of many years standing. I am trying to do something with my collection of VBCW stuff and keep the D M Cornish,Ny Tradgardland and diverse projects moving forward albeit in small ways.

In Trdagardland I can report that the forces of the Duchy and their arch enemies (The Imperium) have set up camp/winter quarters at opposite sides of the Disputed Valley. Over winter I hope to build up some units of the Towns which lie in the valley- something which I am really quite enjoying in terms of numbers to do and results achieved. I do hope to transfer the details from the old map to a more modern version which will aid campaign movement. Energy and time permitting I am itching to set up a small encounter upon the tabletop just to get dice rolling again and the excitement of gaming too. It seems ages since I had a proper battle, went to the local club or gamed with my regular opponent too. But 20011 awaits and I am hopeful too! Have a great weekend one and all.
Posted by tradgardmastare at 09:44 2 comments:

The crowd poured out into the night. It had been another successful monthly Mistery dance in the village Scout hut. All had enjoyed the heady mix of broad bean boasting, compost tips and high politics. With the last chords from the dance band still ringing in their ears the men gathered outside to talk…
“I’m just off down to the allotments Doris!”
“Ok love; see you when you get home…”
Bert made his way along the lane and turned right into the gateway to the allotments themselves. He looked with pride upon the bean plants heavily laden and held up by good old English hazel wands- there would be good eating for all and plenty to share with the neighbours. These were strange days here in Lower Sedgebury Wallop- the vicar denouncing the King from the pulpit, the men drilling on the vicarage lawn and those B.U.F city yobs in their uniforms swaggering through the village and up to no good!
Finally Bert arrived deep in thought at the Warden’s shed. A light was on and laughter could be heard coming through the still night air. Bert gave the secret knock and was admitted into the shed’s inner sanctum where the Kin had gathered. There amongst the terracotta flower pots, used twine, copies of gardening magazines and numerous pamphlets arcane and rather dull, lay a brand new anti-tank rifle! Let them come, Bert thought, we are ready now…
Posted by tradgardmastare at 16:28 No comments:

Throughout the century the main gates and posterns were guarded by watchmen. A reform committee of 1743 recommended that the day watch, being useless, should be abolished but that the night watch should be improved. During the Rye Bread Rebellion an attempt was made to maintain regular night patrols in the streets; in August an hourly patrol by one of the watchmen and one of the constables of each ward was instituted; patrolling was to last from midnight until 4 a.m., between Lady Day and Michaelmas, and until 6 a.m. for the remainder of the year; each door was to be knocked upon and the hour called out 'after the manner now used in Tradgardland and diverse Duchies'; and drunkards and nightwalkers were to be arrested and taken before a magistrate of the ward on the next morning. The night watch was to be paid from money collected in each ward and expected to drill I the event of invasion also. Later in the same month three more efficient and less decrepit watchmen were appointed for each ward, and the watches were ordered to begin at 10 p.m. from Lady Day to Michaelmas and at 8 p.m. thereafter; at those hours the main gates and posterns were to be locked….

Extract from “Von Meyers customs diverse and peculiar of Uhwerkhausen”
Posted by tradgardmastare at 12:28 4 comments:

Gunpowder past and present... 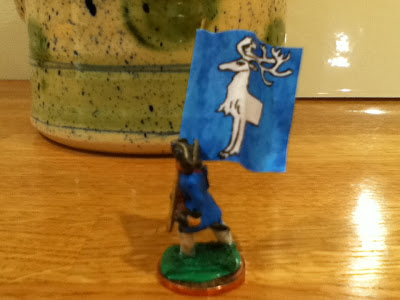 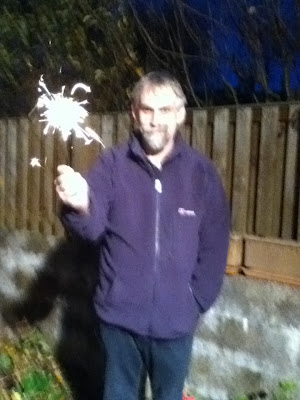 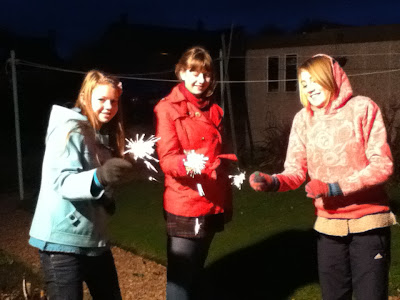 We didn't make it this year to Phil's annual firework garden party last night. However we did manage to have some fun with sparklers in our own garden prior to our evening meal today!
During the day I spent some time painting the artillery crew,field piece and grenade throwers belonging to the Fire Artificer's Guild of Uhwerkhausen. Here is a photo of their famous White Stag banner which refers to a legend of their Guild's foundation in the fifteenth century...

Finally on another matter Chemo number three took place on friday- hurrah! We see the consultant on Wednesday for a chat at this half way through treatment stage.
Posted by tradgardmastare at 17:13 No comments: 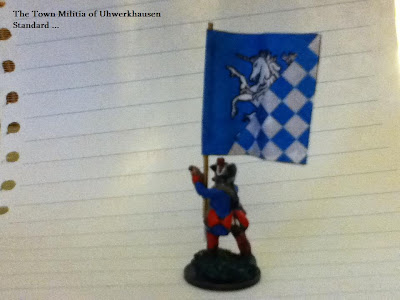 Posted by tradgardmastare at 17:09 2 comments:

The Town Militia of Uhwerkhausen are currently drilling in the green fields at the town's edge. Great care is taken to avoid the town's peacocks- myriad clockwork automata ( see enclosed video...) which walk around displaying their glorious feathers to their inventor the Burgomeister and all other townspeople as they go about their business...

The militia have been ordered to muster in the light of Imperial agression in the vicinity. Envoys have been sent to elicit the help of Duke Frederick of Tradgardland whose troops are currently fabricating theit winter quarters nearby.
Posted by tradgardmastare at 18:58 2 comments: