I conducted a quest for treasure using these rules:
https://pampersandp.blogspot.com/p/the-quests-of-brin-barbarian.html
My barbarian and thief were trying to steal treasure from the bad guys as seen in the photo below- 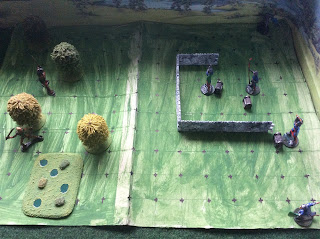 Game was on a 40mm grid using  54mm plastic pound store figures. Many thanks to Man of Tin for the barbarian and thief,the others were pound store knights bought by me. It was a tense game( and great fun) ending in the failure of our heroes to get the treasure. Yet of course there is always next time... 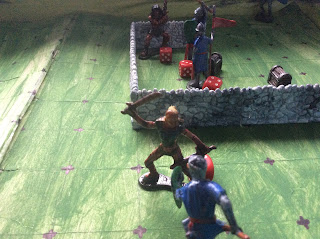 Posted by tradgardmastare at 07:58 13 comments:

Sometimes a uniform really appeals to us wargamers and collectors. Maybe it is the colour or the design or something else. For me it was the Swedish fm/06 test uniform  of 1906 and how it harks back to the Swedish army of Karl Xll. The tricorn especially is splendid. So l commissioned Ian Kay of Irregular Miniatures to make me one in 54mm . I am delighted with his work. 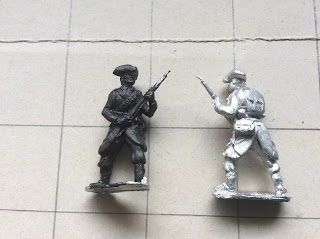 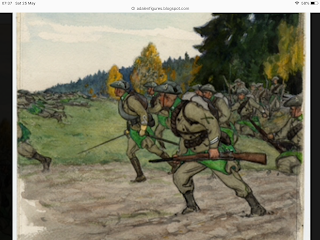 Posted by tradgardmastare at 08:16 6 comments: 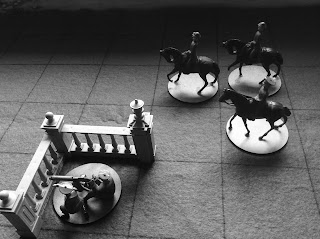 Those dashing cavalry chaps advance supported by machine gun fire... meanwhile tanks and infantry advance on the enemy postions  whilst bicycle troops await orders in the nearby wood. 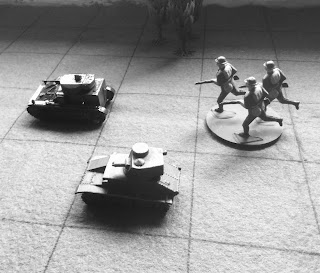 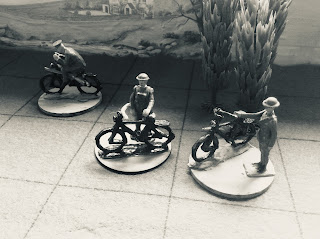 Posted by tradgardmastare at 11:56 8 comments:

Currently Mark at Man of Tin is working on turning scout wide games into a tabletop or al fresco game for model scouts. Here is a link   https://manoftinblog.wordpress.com/
I have been involved by reading independently the text that M of T is reading and make a few suggestions. Mark kindly cast some 60mm Scouts for me. Here they are out on patrol ... 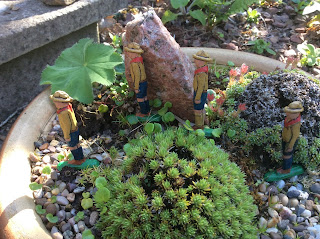 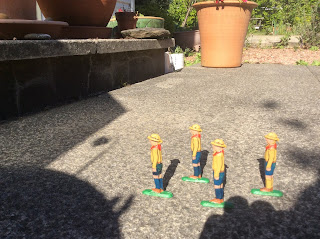 Posted by tradgardmastare at 17:08 3 comments:

Born in the KFC

“One of the most influential figures in Karl Frederick County during the American Revolution was Joachim Hornig. Born of Tradgardland immigrant parents in the Mohawk Valley Hornig rose to fame as Colonel of the District Militia of the KFC. History alone will tell...”
Quoted from “ Annals of Karl Frederick County ,some jottings of note” by Georg Hornig lll 1863. 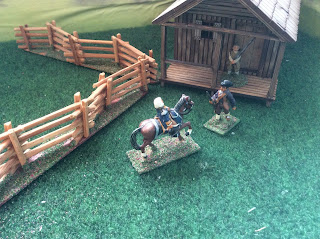 An important visitor comes to the County to ask if Col Hornig is ready as the redcoats are on the march. To be continued.
Background
I’ve been interested in the awi since l fought across the living room floor as a boy with my Airfix Grenadiers. I’ve collected a few books over the years- 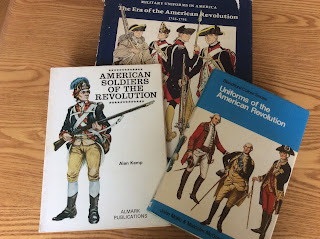 Posted by tradgardmastare at 07:32 4 comments:

Once a month l go to Church in Edinburgh. On the way l pop into the Oxfam bookshop up the Bridges. It is well stocked and fairly priced. Today l got this for £9:99. I am well pleased- 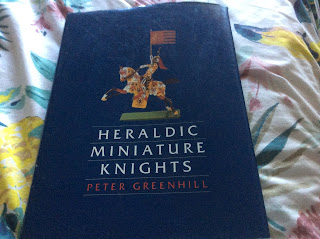 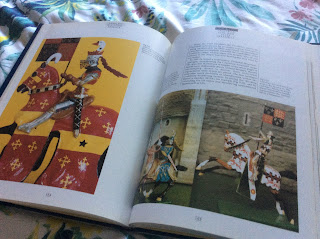 Incidentally there a few other titles on model soldiers, one being by Jack Cassin Scott. I left them for others.

Posted by tradgardmastare at 18:06 6 comments:

I am hoping to put a lot of my figures out into an unheated garage for storage . Most are held in card box files. I was proposing putting these box files into large plastic boxes. Do you think that is sufficient to avoid deterioration over winter? I wondered if putting blankets over the boxes would help? All your advice is gratefully received as ever.
Posted by tradgardmastare at 08:28 6 comments:

What marker pens to you use to add detail,lining on figures? Thanks.
Posted by tradgardmastare at 12:05 8 comments:

Today we came to the end of a sequence of nine games to try out Muskets and Tomahawks. Different combinations of troop types were used and much fun had. Still can’t quite get the rules into my head. This is a crucial point in today’s game- 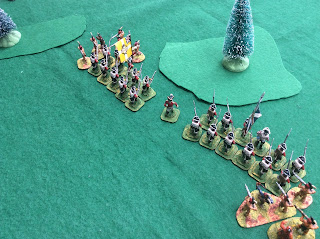 British Regulars about to meet their fate at the hands of the enemy...

Posted by tradgardmastare at 16:43 5 comments: