Just started to watch this on Amazon Prime, what do you think so far?
Posted by tradgardmastare at 17:05 4 comments:

Today the courier brought the Ottoman Turks from the collection of Eric Knowles. I have really enjoyed opening the wee box’s of old school Minifigs delights. Thanks to D C for facilitating this. 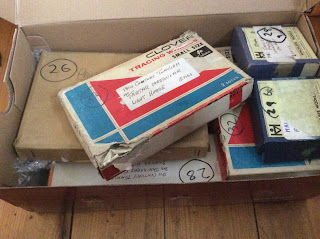 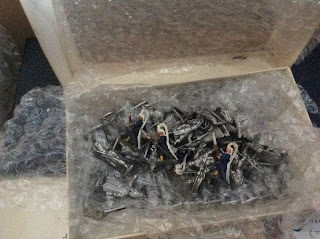 Posted by tradgardmastare at 13:02 6 comments:

The shape of things to come... Pathe News

General Rosti and his staff from Thun are seeing the future of army communications demonstrated. This splendid early warning system is to be established across Helvetica. Mr  Rivella , with his charming wife looking on,demonstrates tomorrow’s cutting edge technology for the 1920s . It is fun,folklore and the future rolled into one...what say you daisy the cow? 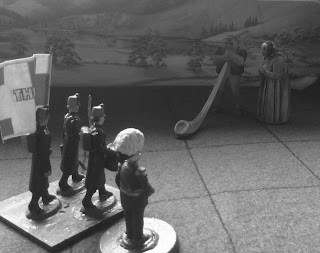 Posted by tradgardmastare at 11:07 3 comments:

Painting some 54mm Interwar Austrians to oppose the wee army in the previous post. Figures are a mix of old Britains and some Dorset soldiers I bought second hand. They are on an excellent book I got for a fiver at Carronade in 2017. It is about the Austrian Army from 1918 to 1938. Text is in German but the illustrations and photos are what l bought it for. 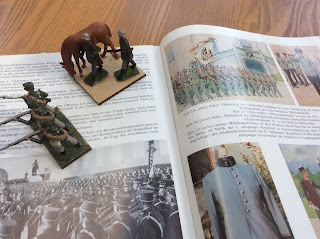 Posted by tradgardmastare at 17:00 8 comments: 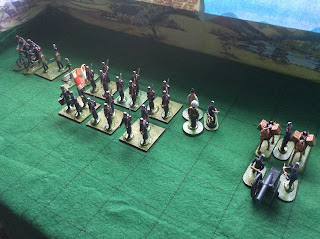 Posted by tradgardmastare at 17:59 11 comments:

Recruits in 1/32 scale arrived from eBay via Russia. They are hardish plastic and will serve well once painted. 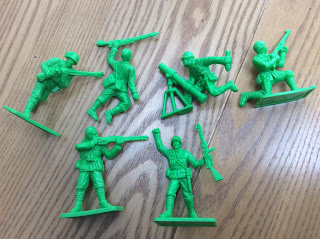 Posted by tradgardmastare at 14:44 4 comments:

What make are these?

Can anyone identify these figures? 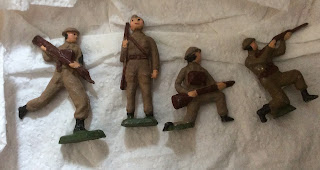 Posted by tradgardmastare at 15:31 7 comments:

Been cleaning out the garage/shed this week and painting the bathroom. In the shed l found some 10mm fantasy figures. This inspired me to set up a game using a square of felt as a board and off cuts as terrain. A pair of friends ( one a dwarf and one an elf) who have been looking for their hobbit friends encounter some orc riders. Figures are by Copplestone castings which pack great detail and character for their size. 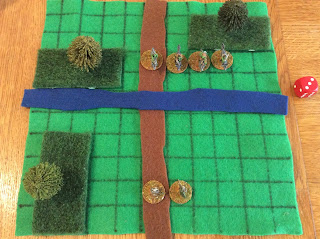 Small,portable,fun and easily carried around. What’s not to like?

Posted by tradgardmastare at 13:36 6 comments:

Brian left an interesting comment on this blog about ww2 style German helmets with Norwegian badges  in a London market. I have found the below photo which shows post war Norwegian Homeguard uniform. 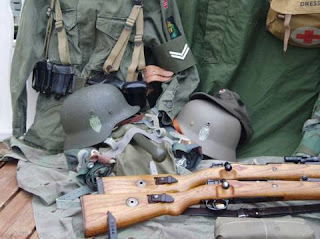 Posted by tradgardmastare at 10:01 2 comments:

The rain and wind are lashing the Duchy today. Inspite of the weather I am fortunate to have a Plummer and joiners working today in the bathroom, not to mention sawing outdoors in the rain.. Earlier in the week my daughter noticed the floor was giving way quite a lot and the toilet was listing too. I phoned the joiner who discovered that the floor was rotten and the toilet would sink through it sooner or later. To cut a long story short they have fitted me in today and are working hard as l type . A big thank you to Gary, Jim and Gary for making this happen.

On the hobby front there are two projects starting. The first is a Pictish Army for DBM. I ordered it last September as an autumn /winter project as my retirement began. The figures have finally begun to arrive, don’t ask long story. It is a largish 28mm army and one to fight the Late Romans and Romano British of my regular opponent. Ideally l would like to finish them by Christmas.

The second in an old school Minifigs project. I have bought an unpainted  Renaissance Ottoman army which is from the estate of the late Eric Knowles.  I am delighted to have some of his collection to work on and looking forward to seeing them. Thanks to David Crook who has really helpfully facilitated this by means of emails and photos. The backstory will be shared here later.

Thirdly l am enjoying gaming the interwar conflicts of the Duchy of Volare- Contare. I will build up the forces in 1/72 for some Portable Wargame battles with my spare Airfix figures etc. I am also building up some 1/32 figures to explore the conflict in the Alps between the Duchy and the Kingdom of Francia. This will be fought using John’s Company Fire rules. As it is a platoon/ company game not too many figures will be needed.

So there we are ,some plans. Off to make the joiners some tea...

On the Border ( with apologies to Al Stewart) a Portable Wargame.

Elements of the Volare- Cantare army have poured across the border into the Empire. Tanks and mountain troops are leading the attack. Local units of the Empire army including cavalry and tanks have rushed to the area to halt the invaders at the main north road... 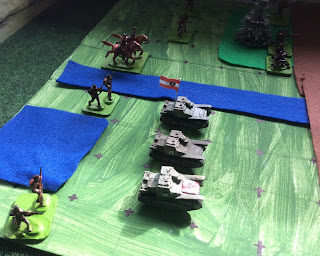 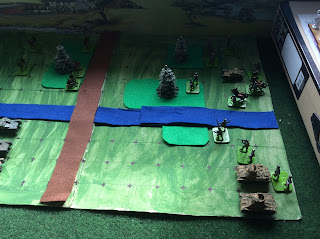 Posted by tradgardmastare at 09:33 9 comments:

Tanks for reading this and answering my question. 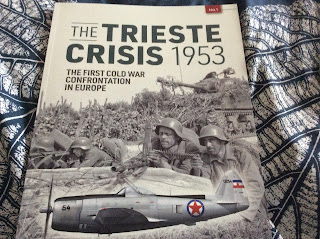 The above book arrived in the post today and fascinating it is. In it there are pictures of the Yugoslav army using German  helmets and weapons from WW2.  This led me onto thinking about what happened to the Germany’s tanks , planes etc at the end of the war. Were they recycled / reused by other countries? If so can you give me examples and suggestions about where to find out more? Thanks.
Posted by tradgardmastare at 12:08 15 comments:

http://pavilionedinsplendour.blogspot.com/
I have restarted using my Ancients blog with a Roman theme and ongoing campaign featuring the Dux who has just taken over command. Do use the above link to stop by and have a look.
Posted by tradgardmastare at 17:53 1 comment: