Black dog been sniffing around all weekend and I have done little hobby related. I was however browsing the web and found this-

I have an original Athena one rolled/scrunched up under the eaves replete with drawing pin holes and blue tac. Along with the Rodney Matthews Elric on dragon it was on my wall for many,many years. It defined the look of the LOTR characters in my mind. 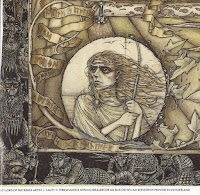 I am currently looking at the LOTR Citadel figures of the 1980s on ebay and am sorely tempted. I have my Mythical Earth collection, my GW figures and my Vendel ones. Do I really need another collection,hmmmm...

Posted by tradgardmastare at 11:35 9 comments:

Set up a trial game for the weekend- 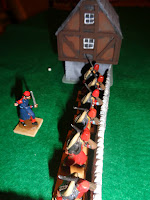 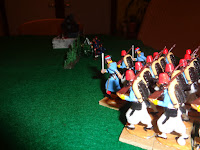 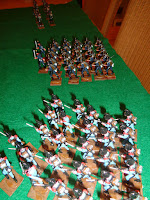 Posted by tradgardmastare at 20:07 7 comments:

My washing machine arrived today,was installed and is currently working away in the background as I type. My 42 mm Franco Prussians arrived yesterday. They arrived thus- 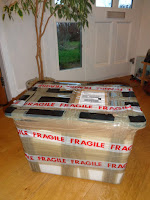 Here are of some of them unpacked- 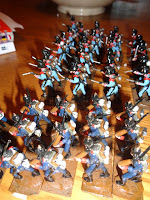 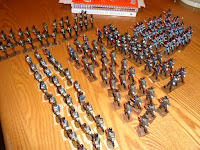 BTW any reading suggestions on the period?I read Michael Howard as a teenager.Are the Ospreys the most economical source of uniform information?
Posted by tradgardmastare at 17:29 11 comments:

I set up a couple of portable wargames on my 3 inch square cloth.The first was to play Bob's published rules (inspired by Ross's recent games) with 54mm figures- 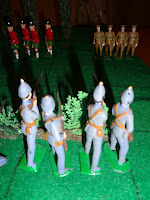 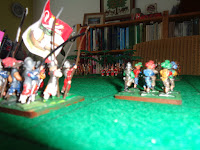 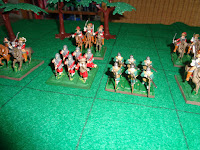 Posted by tradgardmastare at 14:58 11 comments:

An unexpected journey or imagineering in the later part of the 19th century?

I had some vague butterflyesque plans for the time being.I would try and drive some projects forward across a very wide front, then came the email. It told of over 350 painted and 200 unpainted (plus wagons guns etc)  comprising both armies Irregular Miniatures (toy soldier looking in my eyes) 42mm Franco Prussian war figures for sale! 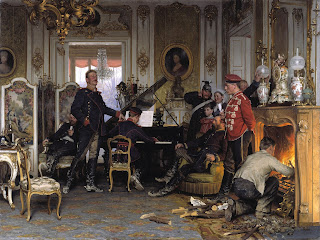 "The Duke of Tradgardland breaking into song upon hearing news of a lead mountain..."
by Anton von Werner

I could not resist with retirement a few (or less?) years away this was the Project to keep me going when the Ducal warchest was not to be dipped into too often for lead in times to come. So I am awaiting their arrival, the infantry are in units of 27 figures so a goodly size..
This got me thinking of imagineering in the period. I imagined some small states holding out against the German confederation possibly Tradgarland herself. So the figures could be used for 1870 France v Germany and also for some imaginary battles involving the successors of Emperor v Elector. Let me know what you think...
Posted by tradgardmastare at 16:52 4 comments:

Today began with the final demise of my washing machine.It has been a tad ropey for some time. Baling out the water was ok if tiring and I have ordered a replacement.
Next week I have a game of Dragon Rampant arranged. I had a wee look at my GW plastic elves- 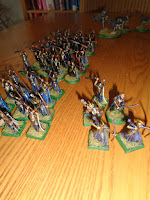 I thought they could do with a makeover. While I worked I listened to-
http://www.bbc.co.uk/programmes/b00b24pf/episodes/guide
This was the first time I had heard the short story "The Birds" by Daphne Du Maurier as opposed to the film.
It's a cracker click on the link to listen to it.
Secondly I am currently enjoying Post Modern Jukebox. They are a reimaging in 30s style of modern classics. Give them a whirl at-
https://www.youtube.com/watch?v=bZpdXgsI6C0
Finally a picture or two of  the made over elves- 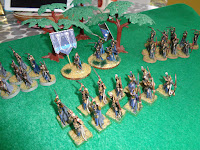 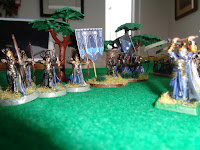 Posted by tradgardmastare at 16:50 2 comments: 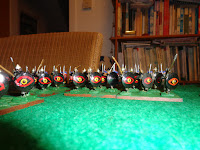 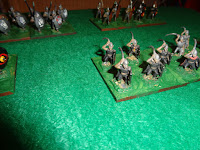 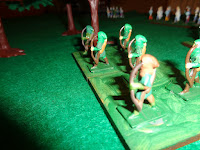 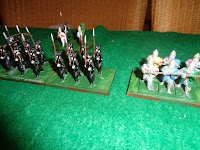 Note to self in light of pictures- repaint/flock bases and edge in brown.
Probably use Dragon Rampant rules.

Posted by tradgardmastare at 19:14 8 comments:

A parcel from Canada 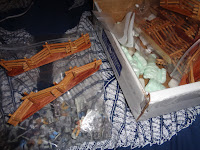 comprising of some splendid fencing and some acw figures. I am most grateful to the Mad Padre for his most kind gift. Here are some of the figures- 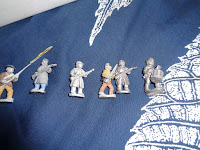 which look great,I particularly like the great coated figures. I am inspired to get some Perry Miniatures British figures to do some skirmishing based upon the British/Canadian intervention in the ACW.

Posted by tradgardmastare at 18:18 3 comments: