Putting the 28mm figures aside for a break I started to work on 54mm figures and buildings. This was much earlier in the day- 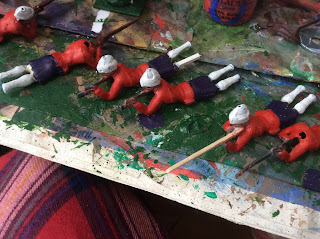 Rifles replaced with ones carved from wooden coffee stirrers, missing legs with match sticks and some figures awaiting new heads. Below is the house I was working on with card tiles on one and serviettes as thatching on another. The bottom picture shows the figures before I began today. Evident are the makers mark ( J H for John Hill & Co) on the underneath of some figures and the general dilapidated state of them. I mused as I worked away about how would H G Wells have repaired the figures he used. Does anyone know ? 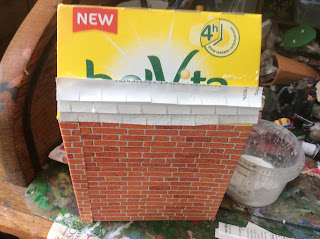 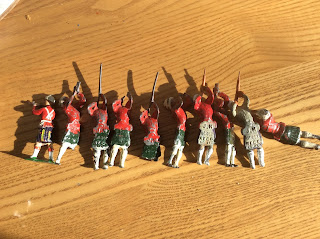 Posted by tradgardmastare at 17:27 13 comments:

I am intrigued by the current wave of interest in paper soldiers. I had some lovely press out card knights and castles as a boy although their one sidedness put me off a little. Nevertheless they had great play value and were fun too. I saw the below when they appeared on an Amazon search- 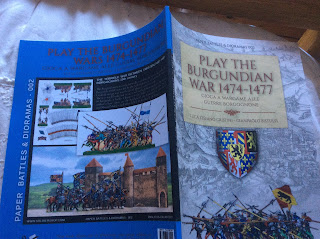 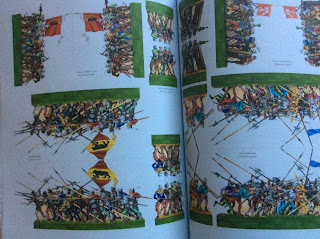 They are quite small and I am considering enlarging them a little on a photocopier. They remind me of zinnfiguren flats in terms of style and lack the interesting basing methodology of Peter Dennis. However they are a period I am fascinated by and will give them a try.


Posted by tradgardmastare at 16:40 7 comments:

Hello old friend or reacquainted with the Gush rules.

I have been wargaming with P since 1986. Since retirement this has been more regularly. One of the highlights over the years has been the ongoing struggle between the Duke of Burgundy and the Swiss Confederation in the 15th century. We have played many games over the years mainly with DBM , looked at other systems and abandoned them. Recently I suggested we try the Renaissance rules by George Gush. I have well worn rules and army lists but invested in the new edition by John Curry. They are easier upon the eye and avoid the hand scrawled amendments of my old copy. The day arrived to try them out. 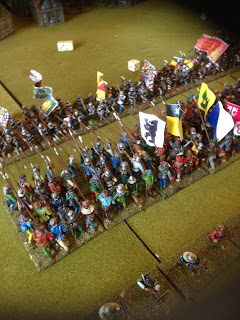 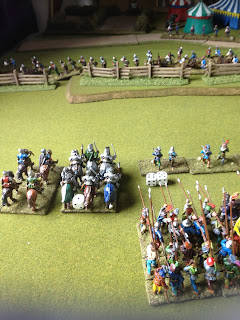 It took time to get used to them again but it began to come back and it worked out really well. We will certainly try them again. Well worth investing in if you don’t know them. We will have to wait till next week to see who wins... 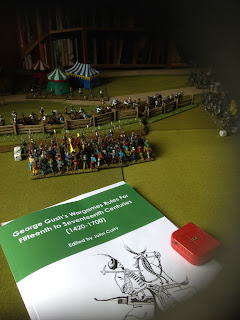 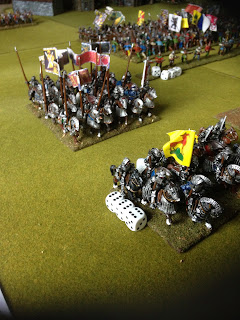 Posted by tradgardmastare at 18:48 9 comments:

Working towards Woking on Thinking Day.

I have been working towards the forthcoming games day at Woking and discovered, through an old friend, today was Thinking Day. I had forgotten about it although I used to help with it in the early 1990s and late 1980s. What an amazing coincidence. I’ve enjoyed the background reading and preparation of figures- 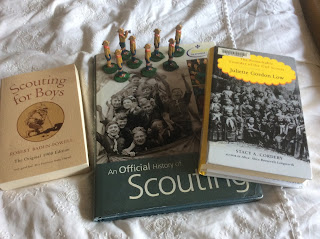 Today I have been finishing off a patrol of mixed boy and girl scouts circa 1908. The Girl Scouts have been converted by using tissue paper and glue. They are moving forward well. 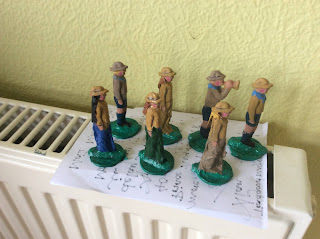 More info can be found re gaming and history here-https://tabletopscoutingwidegames.wordpress.com/2020/02/21/from-broken-limber-to-trek-cart/

Posted by tradgardmastare at 11:09 2 comments:

I was away in Yorkshire over the weekend visiting friends. I was stunned at the amount of flooding in the fields as I passed by in either train or car. Poor farmers as if they don’t have enough to fret about already...
Friday saw me visiting the Royal Armouries, a delight as ever. I managed to catch a demonstration of Japanese sword drawing which was fascinating to watch and the demonstrator was equally fascinating to listen to. The museum is getting ready for an exhibition on the Field of the Cloth of Gold later this year which looks well worth a visit . Saturday saw me driven to Settle,which looked interesting but the weather stopped us getting out for a wander. Sunday morning and we visited a church with an Anglo Saxon holy well in the grounds and bell ringers within, not to mention friendly welcoming folk.
Yesterday I came home to a parcel. It contained some of Eric Knowles 16th century figures. Here is a photo of them 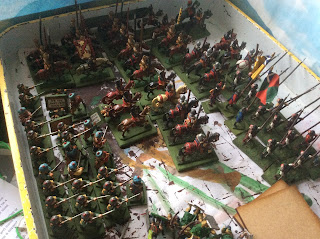 They will complete a small side project to fight some imaginary battles of the second half of the 16th century inspired by battles like the battle of Langside, of Carberry Hill and the Siege  of Haddington. Scots soldiers will mix with foreign mercenaries. I am excited to take Eric’s troops forward into battle and to let them fight on..
Finally can anyone suggest a figure ( preferably 25mm and old school) I could use as a mounted or on foot Mary Queen of Scots?

These plastic knights arrived today, an eBay purchase. They are full of character and some I have never seen before. I particularly like the King with a crown upon his helm in the top row and the chap  on the the right of the middle row with the mace. 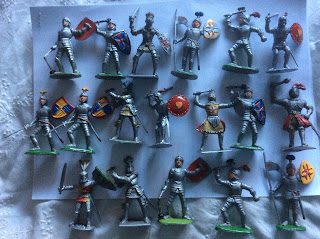 What would be the best guide to buy to help identify them ? Can bowmen be purchased in a similar style?
The figures remind me of the illustrations I have seen of the Eglinton Tournament of 1839 in some ways.

Posted by tradgardmastare at 16:21 8 comments:

Here are some photos comparing mainly Expeditionary Force dark age 40mm figures with metal ones which I think are Sabre and Sash. One picture also contains some very cheap toy soldiers for size comparison also. Hope these are helpful- 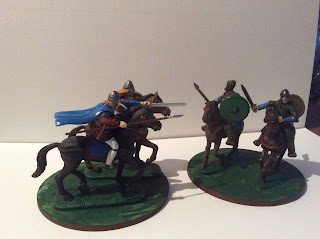 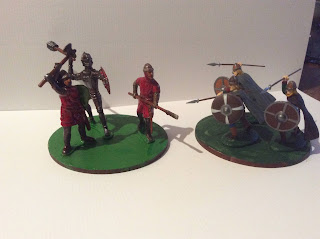 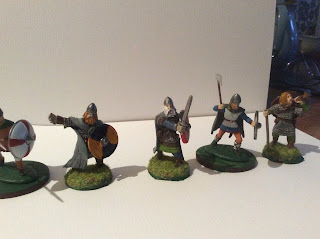 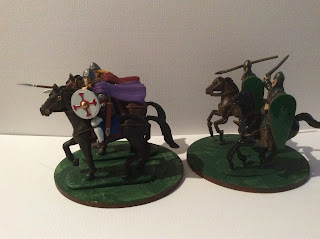 Posted by tradgardmastare at 08:35 5 comments:

Having read about the rules on the 54mm or Fight blog l sent off  for a copy of One Hour Skirmish Wargames. I hope to play test them using the plastic 54mm figures I have been painting this week. Firstly the Volare Cantare contingent- 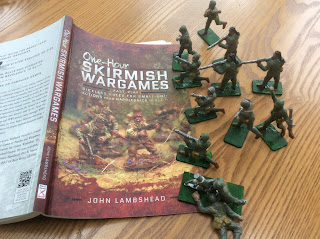 Secondly the mountain troops from the French Kingdom- 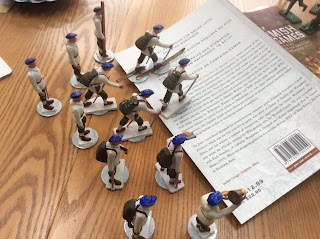 Finally I have got round to subscribing to Platic Warrior. Paul my contact was most kind in sending me review copies prior to me signing up. Today my first official issue came along with a set of Medieval 54mm Rules added in, thanks Paul 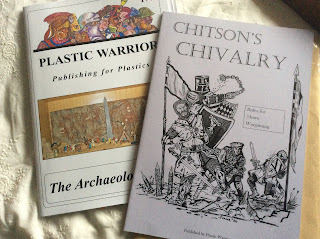 Posted by tradgardmastare at 10:32 15 comments: