A blast from the past

Much of the day has been spent sorting forces for "The Pikeman's Lament" and using current figures I should have  three smallish forces- A ECW Scottish Covenanter one which will be opposed by either Montrose's Scottish Royalist or an English one of the Bishop's Wars for different scenarios. Whilst sorting things out I came upon this chap- 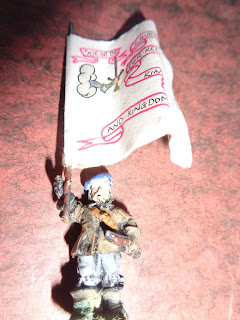 The flag was drawn by Jan in the early days of our marriage for a display game to be put on at Claymore of the battle of Winwick Pass. It goes without saying he will be pressed into service once more. She also painted this for the same display game- 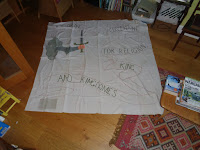 which I found in a drawer after some searching. It hung on the wall behind our game.
Posted by tradgardmastare at 16:31