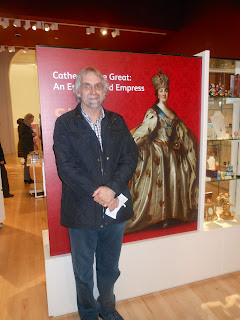 A photograph of the Duke of Tradgardland  just prior to going in to the exhibition-Two key eighteenth century figures depicted together for the first time.
We were treated to a glorious array of   court costumes,china,paintings and diverse fascinating items from the 18th Century.A few hours flew by very quickly indeed. I was particularly taken with a wooden intricately carved sledge and the picture of an ice mountain built upon a frozen river used for toboggan rides by the Court.It was a tremendous exhibition to visit and I have had my "Enthusiasm Batteries" for the 18th Century recharged...
Posted by tradgardmastare at 17:08