That old (well ancient) black (in terms of undercoat) magic (in terms of spectacle) has got me in its spell...again

On Saturday I went to Claymore with my friend Phil.I enjoyed chatting to old friends and looking about.After the game we went back to his house and set up a game in his newish wargames room. It was Carthaginians v Romans. I was a tad unsure about the game before hand and how much fun it would be. We were using rules I had doubts about- DBM and had not played for ages................. 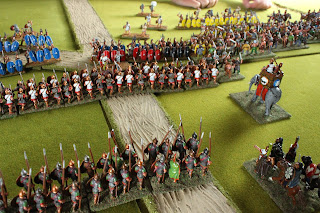 To cut a long story short it was great fun,totally absorbing and I even lost! Here you see my Romans advancing to meet their opponents.Note the spectacle and variety of troop types. 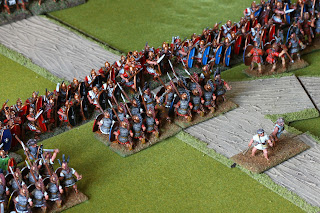 My Roman veterans holding the road as the Cretan slingers flee. 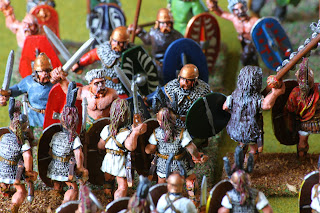 The Gallic warbands breaking into the Roman lines.The rules work really well at replicating units breaking into a formation and breaking through...
All in all I feel that my enthusiasm for one of my wargaming "first loves" has returned-I began with Airfix ancient Brits v Romans and have gamed ancients ever since. So what's on the horizon-
1) Playtesting for the forthcoming urban skirmish rules - see-http://irregularwars.blogspot.co.uk
which look fun and i am delighted to be involved in
2) To continue to game with Ross's splendid rules with my 40mm chaps as mentioned in my last post but one
3) To finally get down to collecting an opponent for my Imperial Romans- maybe a middle/long term plan,maybe not...
I know many who read this blog are not ancient gamers but I encourage them to at least dip a toe in the water .Who knows you might get hooked.
P.S figures are Phil s as are the splendid figures
Posted by tradgardmastare at 10:21