It is a couple of weeks since I last posted. Last weekend I was in Glasgow for Model Rail Scotland (my first ever railway show) at the SECC. Most interesting and enjoyable.Whilst there I was mentally comparing and contrasting with wargames shows. The model railway show had more families there, younger folk operating the train ( of both sexes) and being involved and the atmosphere was less smelly than some wargames shows. I didn't find that operating folk were any more willing to engage in conversation than folk at wargames shows on the whole. It is interesting to note that unlike wargaming there are more of a future generation coming through.
I however came down with a fluy/coldy thing and spent the next day in bed and have found it hard to shrug off this week.
Today is Mother's Day and a difficult day for my daughters. It is also my 56th birthday- 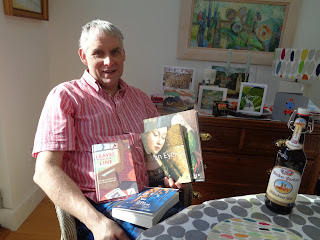 I received some lovely cards and some excellent reading material and look forward to a celebration meal later in the day. I am going to potter about with some old school ancients kindly brought for me by the Forbodian Ambassador who visited the Duchy  most enjoyably yesterday.More about his splendid little naval game in another post shortly.
Tomorrow would have been Jan's 54th birthday.All in all a weekend of joys and sorrows.
Posted by tradgardmastare at 12:21