A grid of offset squares for the Portable Wargame 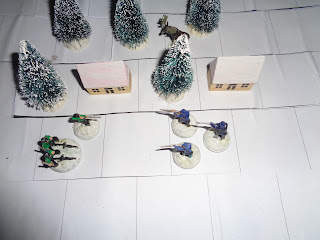 I set it up using a paper board ,some wooden houses and my late 19th Century/Early 20th Century Scandinavian armies using Airfix 20mm plastic soldiers. Not to mention an elk for local colour.
Posted by tradgardmastare at 17:49