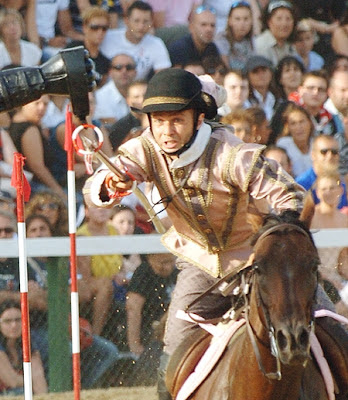 In fields and courtyards the practice has begun.The people of the Duchy prepare for another season of jousting. Talk is of horses and the best wood for lances, of last season's victories and hopes for the coming year. Teams train, drink,squabble and pray together. The honour of a hundred guild,herrengard or fraternal group is at stake.

The rules are simple :

Teams of five riders plus two spare horses. The teams take it in turns to gallop at a suspended ring. If it is caught fair and square they gain a point. Each rider rides twice. At the end scores are compared and a winner declared. In the event of a tie it is "sudden death " until a mistake is made and a ring missed or dropped.

And so in the season of mellow fruitfulness and harvest the Duchy can again turn its thought and energies to this sport of Dukes ,Kings and everyman.