Another week of work over.Of late I have been planning to use the Military Modelling rules kindly scanned for me by a fellow OSW  chap.I had wondered about buying the figures depicted in the magazine article but in the end opted for some I had already to save some money from the Ducal warchest.
Saturday at last.I got up at 7.30 and spent a little time on moving a project forward- Medieval Skirmish rules by Charles Grant. I looked out some of my earlyish Medieval figures and proceeded to base them on cereal packet card painted a simple green.It was fun to base this way as so much of my basing of late has been pre-cut mdf or slotta plastic bases.The joy of ruler,scissors and glue took me back to my wargaming of years ago. 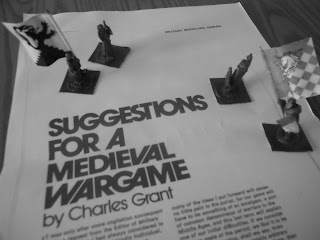 The result of a little effort and much thinking on trains,platforms and whist doing diverse tasks has been the creation of two medieval skirmish forces/feudal bands complete with their Lords and accompanying banners. The rules are fun,straight forward and should give a good game. More on these medieval inhabitants of the Duchy of Tradgardland very soon along with some pictures of the troops making up the feudal bands themselves
Posted by tradgardmastare at 18:14