Morning all!
I am starting on my quest to raise some Minifigs Mythical Earth figures ( I
blame that forthcoming film...) once more.I have some about to come from afar
and am asking you all in case you have the odd fellow lying about unwanted.
I would like to begin to rebuild my forces of circa 1976.

These chaps of mine could do with some company  so rake hard and let me know what you can spare.

I never did them painting justice all those years ago and I would like to make it up to them if I could.We were 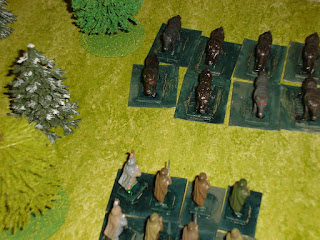 so keen to play that they took the field ( carried lovingly in one of my father's empty Van Heusen shirt boxes) with a rough coat of paint and a few details highlighted.Worst were the wee trolls in a pinkish shade.Those were the ones who tuned to stone in daylight in a battle or two and became hard cover to defend! I was rather envious of the splendidly painted armies in use at the South East of Scotland Wargames club at the time. I can't quite recall where all my figures went in many house moves save to say they have been gone for ages.A shoebox, full to the brim,were used regularly in my student days to play Dungeons and Dragons and were left in an Edinburgh flat live din by my friend Tony and where the games were played  ( may be still there in a dark corner -loads of Uruk -Hai and lesser orcs too,enough for a splendid dungeon crawl...)from what I recall for some unknown reason.Whoa,that enough nostalgic wallowing for one day.Have a great Saturday one and all!
p.s apologies for odd font size/layout but either Blogger or myself is playing up terribly this morning!
Posted by tradgardmastare at 07:45