First large wargame I ever saw....

As a teenager  I went  to see an exhibition of Fenton's (?) Crimean photographs in Charlotte Square Edinburgh. I forget the year. I was really looking forward to seeing photos like these- 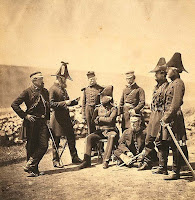 The photos were fascinating but what really caught my attention was the wargame put on by the South East Scotland Wargames Club. There laid out in a large room was a Crimean battlefield replete with Peter Laing figures. It seemed vast to me and on closer inspection it was filled with regiment upon regiment. I recall being fascinated. Up to that point I had mainly painted Rose etc 54mm figures for display ( although growing up with Airfix etc fighting battles from an early age) here was something else - I was hooked and find myself still hooked near on forty years later. I went back again and again and watched and was filled with wonder.I can recall the excitement still. The excitement that led to carrying armies ( Mythical Earth and Airfix acw /tanks) around in my father's old Van Heusen shirt boxes to games. The rest is history as they say.