Tuesday 7.30 a.m
We planned to go over to Edinburgh today but the severe weather warnings from the Met office changed our minds. I awoke at 6.45 a.m and heard the rain and wind battering the Duchy! Last night we watched "Endeavour" on ITV1 and I thought it was excellent. I am a great fan of Inspector Morse,less so of Lewis but loved this new  Endeavour. Morse was depicted in his youth of the 1960s and his earliest days of detective work.Well worth a watch chaps.
I couldn't resist this 18th century picture of a windy day in Edinburgh in the days when she was the Athens of the North. 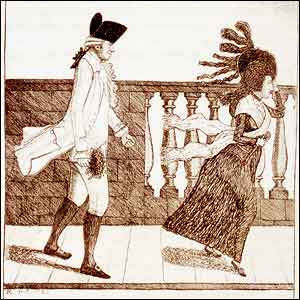 Yesterday tried to sort things out re hobby stuff,paint a little and think about what to do this year, One definite is to game more. Hopefully to establish a monthly game with my regular opponent Phil. The ACW will feature large in our gaming and plans. I have sent for a couple of artillery pieces complete with crews and odd figures to complete units in the brigade. Hopefully Dixon will dispatch these soon. I am keen to solo game more too- time and energy allowing. With this in mind I have shifted all the Umstrittental units into a box file for pickupability.I am more inclined to game if I don't have to hunt stuff out. Gosh that wind is hollowing outside- last year snow this year wind? The Forth Bridges are suseptible to closure and this "ups" things greatly with regard to travelling to work. I am fortunate to not have to go out today! Other hobby plans are up in the air at the moment.I have loads of ideas,half finished schemes and loads of lead around. I feel I have lost my way a little with vbcw gaming- I never game it ,try to model too diverse a range of stuff and don't really get anywhere with it. Yesterday I found a half started project of 1860's Old School style wargaming set in Tradgardland. Some figures looked good and I could have enough for some gaming- hmmmm. Loads to think about as I pour another coffee and throw a metaphorical log on the metaphorical fire...
Finally the title of this post came from an album by the band Genesis who I have loved since I discovered them in my teens- this album was possibly one of their best in my opinion.
Posted by tradgardmastare at 07:33