And so the game...part one 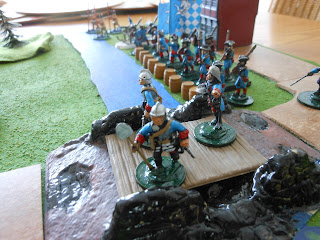 The engineers from the village are desperately trying to dismantle the temporary bridge under the watchful eye of their officer. A dice thrown by me ascertained that they would need three turns to do this in order to make the bridge unable to be crossed by the enemy. 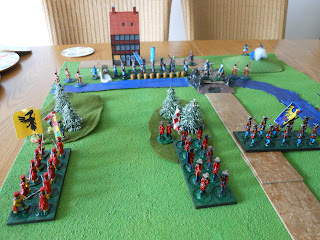 Meanwhile the enemy have begun their attack.One regiment on the right advances up the road to take the bridge whilst two advance cautiously through the small woods on the left.The troops of Syldavian extraction are preceded by a few jaeger. A cannon near the town opens fire but to no avail. 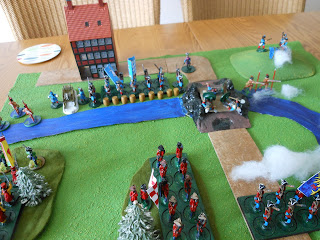 The Defenders ,in the next turn,fire the cannon again with minimal effect and some of the light infantry have opened fire too.Meanwhile the attacking troops have proceeded well through the woods without too many twisted ankles and troops dropping out of line to forage etc.The attacking regiment advancing up the road opened fire at the engineers on the bridge and although they counted as in hard cover they took casualties.The dismantling having to cease as the wounded are cared for.
The battle report will continue in part two. I am considering adding some random factor for movement to add/subtract from the normal moves to add a little uncertainty to the proceedings in the future and some mechanism for troops moving in larger woods to allow them to get lost/exit the wood at the wrong point.I do not want to add much as I enjoy the simplicity of things  but these could be factored in easily with a dice throw to plus/minus normal moves and also a compass point dice to see in which direction they move...
Posted by tradgardmastare at 06:52