Well we did manage a game last night.Here area few photos of it. 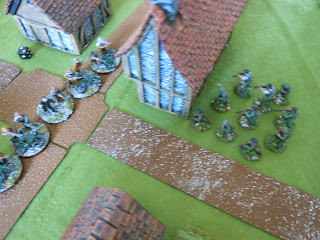 The  Llangubbin fast cycles are about to engage in a firefight with members of the people's assault column. The plucky cyclists put up a show but ended the game numbers greatly reduced and having cycled off the table in retreat. 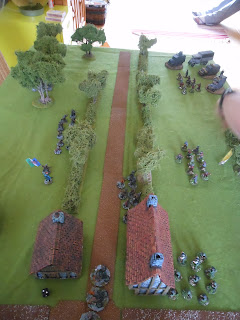 The fully set up dining room table .The Liverpool Free State forces are on the right in this picture,no pun intended. Note excellent scenery my regular opponent has bought which serves well for a number of different periods. 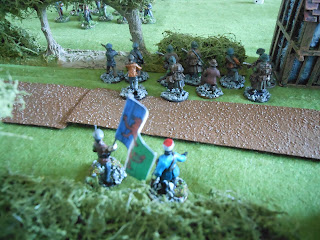 Finally a picture of the Welsh Nationalist battalion commander and his standard bearer.He is a French army officer (wearing his full dress uniform and carrying his cavalry sabre) and Welsh speaker ( French father and Welsh mother) who has come to offer his military expertise and throw in his lot with the fortunes of a Free Wales.

P.S I am a tad tired this morning as I stayed up to watch the Olympic Opening Ceremony on television with my family.It was quite amazing and a fitting start to the proceedings.A loud hurrah for all concerned with it I say!
Posted by tradgardmastare at 06:44