At the request of Bluebear Jeff and also because it is some weeks since my last game I set up a small 18th century scenario on the dining table.It concerns an assault upon a small village in the Disputed Valley.All my figures (with room for more) fit nicely into a box file and it is accessible to dig out with minimum fuss.The photo below shows the situation- 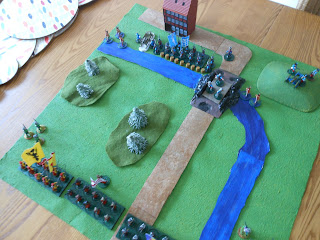 At the top of the photo (please click upon it to enlarge it) the village is defended by a regtiment of infantry who have built light defenses from rubble filled wine casks.They are supported by a smattering of light infantry and two cannon-one on a hill and the other sledge mounted one in the town itself.On the bridge engineers frantically attempt to dismantle the hastily built wooden replacement bridge over the one they blew up earlier as a measure to stop the enemy.A dice will randomly determine how long this will take.
At the bottom of the photograph the assaulting forces can be observed-3 infantry regiments and two small groups of jaeger- one just off screen at the bottom right hand corner.
The game is set up, the minimal rules carried in my head and I can't wait.Photos and battle report later...
Posted by tradgardmastare at 07:06