The hills are alive with the sound of .... croats!

The new Duke of Tradgardland is leading a detachment of the Ducal army into the hills between Tradgardland and the Umstrittental. For a number of days now news has filtered back of farms being raided and animals stolen.Farmers report that the croat troops of the Imperium are in the vicinity.Finally local scouts find the croats hiding in the hills and a Ducal howitzer is deployed- 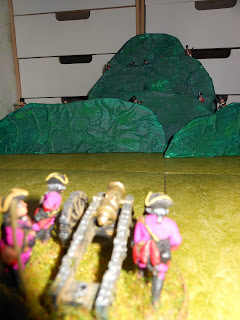 After some time  and sweaty work under a midsommer sun the artillery crew have failed to flush out their quarry.Dejectedly they report back the Duke Ferdinand  who consults with his officers and advisers.After fierce deliberation over a seven course banquet it is decided to attack the hill position with infantry the next day.
The Ducal troops are up with the dawn and soon are mustering.Against the express wishes of his officers the Duke insisits on leading the troops forward himself... 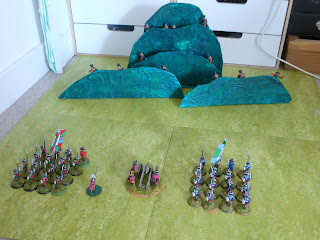 With banners flying and drums beating the assualt is on.
Posted by tradgardmastare at 17:04