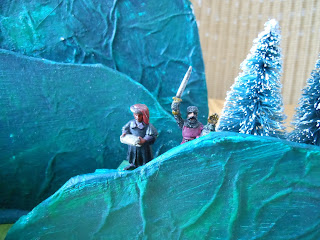 It is Midsummer in the Duchy of Tradgardland. A time of celebration across the land.With a smattering of snow still upon the forest clad hills, the Master of  the Golden Herring Knights looks on as preparations are made for the annual Tournament. Swords and other cutting weapons are blunted,arrows fitted with wooden bodkins in preparation. It is  an affair of honour but no blood will be shed- hopefully! 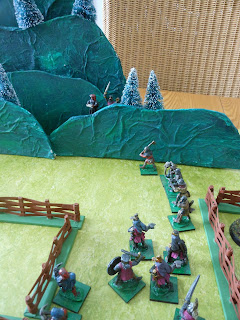 One group gathers consisting of Knights and crossbowmen ready for the fray. 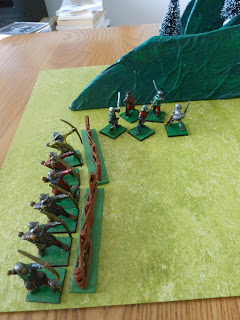 Their opposition gathers- bowmen and men at arms.Let the tourney commence! 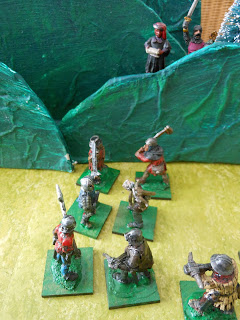 Under the Master's watchful eye the crossbowmen exchange blows with the men at arms. 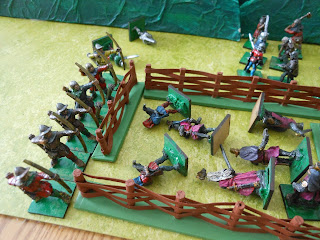 Rubbing their bruise covered arms,legs and bodies the prostrate crossbowmen and knights vow never to charge a bowman filled fence again.They have learned their lesson! 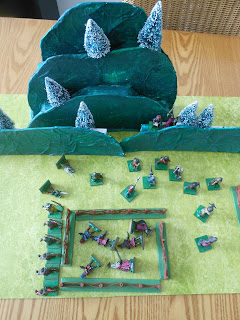 Seeing the fate of their friends the crossbowmen make a hasty exit... 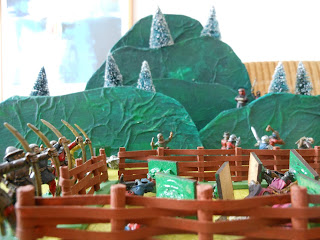 An English bowman ,in the employ of the Duchy, cannot resist a defiant gesture as his opponents leave the field. 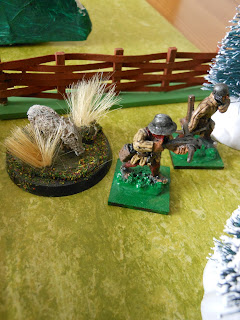 Things go from bad to worse.Two fleeing crossbowmen are chased through the Duke's hunting reserve and just get away with their lives!
The Grand Master is pleased with all he has seen.And so, as the Midsummer sun shines on everyone , battered and bruised Tradgardlanders make their way to the "Cornered Kobold" tavern  to quaff ale,eat herring and sing the evening away until the sunne finally sets.
An enjoyable game using"Suggestions for a Medieval Wargame " rules by Charles Grant from an old Military Modelling Annual. It was good to get a solo game in today.
Posted by tradgardmastare at 12:08