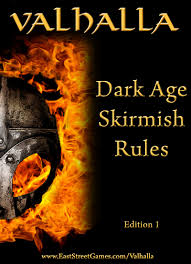 Phil had Anglo Saxons and I had my Welsh- 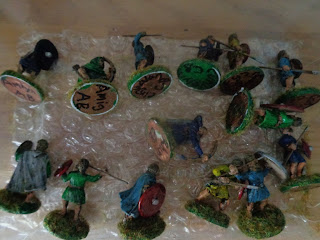 My Welsh are all lightly armoured and the majority sport javellins or bows. In the game ( to capture some wagons) I ran rings round my opponent throwing and firing. All went well well until he closed to combat when his armour and weaponry won the day for him.
Valhalla is a simple but fun rules set. One can upload pics of figures to the website and it will generate statistics and produce cards which can printed out and used in games. Pop over to
http://valhalla.eaststreetgames.com/WhatsIncluded.aspx and have a look...
I have some Norse on the paint table currently.
Posted by tradgardmastare at 10:20