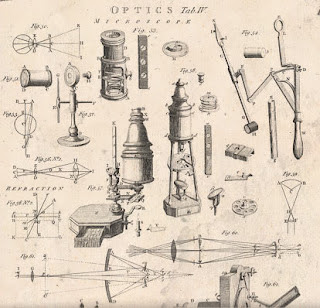 The Duke is engaged in using his microscope to view the hidden and arcane world it reveals - in this case the contents of the palace water supply. A knock comes to the door . The Duke looks up and beckons the figure to come in .

A young man with chains on hands and feet shuffles in- he is plainly terrified.

The Duke reminds him that judicial torture has been outlawed in the Duchy so he has nothing to fear. The Duke quietly and calmly awaits an explanation.

The young man breaks down in tears and throws himself at the Duke's feet. He asks for mercy and tells of his home land in Schwartz Wald See. He tells of troubled lands and oppressed peoples. He talks of how he was to kill Max before he even saw his new domain. The Duke looks thoughtful and remains silent for sometime . He calls for the guard and asks that the prisoner be escorted from the Duchy as soon as is possible bearing a note for the ones who sent him