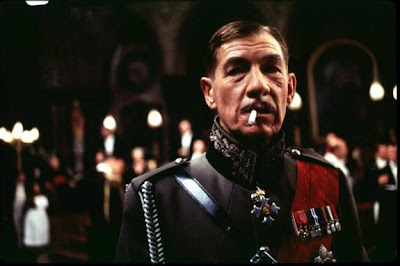 A wonderful Sir Ian in action...


For any of you wanting a taste of the wargaming world of a Very British Civil War I suggest you go and have a peep at: http://panzerkaput.blogspot.com/ for those new to the period/concept have a look at this written by Hasting ( as an intro to GWP3- I trust it is ok to quote gentlemen) - "


"The project began in a conversation between Mort and Wardlaw (Rob) both had seen Sir Ian's Richard III and were suitably inspired. They began to bounce ideas around and a game was eventually set up for Somerset. At the same time ideas were discussed on the first GWP forum. I came in at a chance meeting with Mort at Phalanx. I had been equally inspired by R3 and had read a bit on the 30's and was thinking at sometime it would make a good project, the meeting with Mort got things going at a pace. I said I would do them some flags (and at that point started thinking about my own first unit which started life as the Duke of Gloucester's alarm company but ended up as Lord Cirencester's) Having long chats by e-mail we thought of doing a mag article- then someone said lets do a book! The project expanded from Somerset to thinking about the whole country. Rob and Mort already had the League- which was easy to make a national opposition, then along came the Liverpool Free State, the Scottish Crisis and Nationalists in Wales and Cornwall. We met at Mort's and drafted out plans for 10 or 12 factions and went away to write. The first source book was the result of that. ...

1. If you buy into 1938 you buy into the idea of being a Gentleman. This is quirky but important. There is a considerable amount of nostalgia in this project ,and it might to some extent work because guys reaching middle age seem to look for a more golden age better than our present lot- maybe its a wargamers form of midlife crisis?- lol im not a shrink! But from the outset what we were creating was actually more important than winning games. That translates both into how games are played and the composition of forces. The guys at Gripping beast were really impressed with the way we conducted the games there, nothing was really said or enforced but there was an unwritten gentlemanly code to play, and no one was really too bothered who won, as long as we all had a good time- this makes 1938 different and not a good competition game Also this is a war of amateurs and while you will find no end of eccentric Heath-Robinson style weapons ,none is designed to be a war winner. The same is true with units- adding colour is more important than ability. We have foreign and exotic troops because its fun not to win battles- strange I know but that's the kind of people we are Linked to this is the 'Very British' bit. Its no accident that the preferred name of the project is 1938 A Very British Civil War (increasingly seen as VBCW). The original team wanted that caricature of 1930's Britain at the heart of what we came up with, Cricket and afternoon tea are as important as period weapons and armour This isn't just the Spanish Civil War replayed in our green and pleasant land- but a war fought in a very British eccentric way. This we are still working at translating into games (chance cards are a big help) but this characterisation, although we know its largely a myth is what gives this 'period' a distinct identity.

2. With the sources books and material Solway publish we try to put together a workable and consistent framework without being proscriptive over detail. We want to leave as much 'white space' for players creativity. Where possible we have tried to include as much as possible the ideas, campaigns and games at grass roots in the picture of the overall war. This isn't easy and sometimes we end up with something that isn't what you want in your local campaign. In those situations we always say- its your project go with what you want to do, use the material thats helpful but feel free to do your own thing. My favourite analogy about the source material is that 'we are producing parables not commandments' a guide, a resource, a place to start but not the law.A lot of people have said they like our open house policy on rules, again we like to allow players as much choice as possible. We will be producing a compendium with some rules in, but again this is meant as an aid to be adapted, used or disregarded as you see fit, without in any sense suggesting 'you are not doing it right'

3. Final point links into 2 really- there is no right way to game 1938. As often playing an Anglican Commander I can say the 1938 community is very much a 'broad church'. Some folk have leanings towards fantastical worlds populated by weird and wonderful creatures others are more concerned with a rigorous historical orthodoxy getting every period detail authentic. Most of us sit some way between these two extremes, there is no right answer. How you play 1938VBCW is between you and whoever you game with, our hope is that it will be enjoyable and fun. The line taken by the source material will try and steer a middle course, enjoying the insights of historical research while shaping it to fit the fantasy of a Very British Civil war Enjoy."


I do hope your appetite has been whetted...
Posted by tradgardmastare at 19:58