A surprising change of direction... 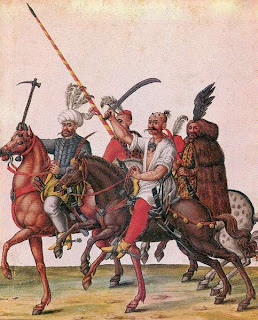 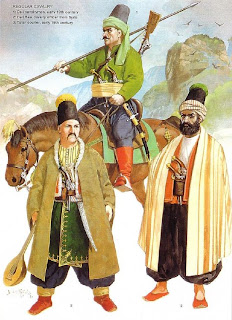 Call it a moment of madness or enthusiasm,perhaps a whim if you like but I bought some 18th century Ottomans online on New Year's Day!

All my plans about going easy on spending from the "War Chest" and downsizing/freezing the lead mountain went to pot. Actually it was a combination of things- laying out my smallish but effective Imperium army and realising I probably had enough of them ( apart from some vignettes etc I suppose ) and they needed another opponent, browsing through my copy of "Force of Arms" by Duffy, coming across the leaflet my wife designed for me for Edinburgh University Wargames Club's demonstration game of the battle of Banjaluka 1739 around 20years ago, finding the stuff I had on 18th Century Ottomans photocopied and spirited away and finally a New Years Day feeling that I had always wanted to do this army for over twenty years( I blame Duffy's book "The Wild Geese and the eagle" from the uni library too) at least...

A look at the Styria Zeughaus online combined with the part of Duffy's book about the fear of Tartar invasion and the specific Austrian anti-Turkish kit and tactics fuelled the fire and so ( slightly taken aback and shocked) I have gone for it.
It will not be to huge a force,will probably take time to assemble but all in all I remain excited and my dreams filled with gaming potentialities. What do you think?
Posted by tradgardmastare at 07:15