53 not out and the Knights of the Golden Herring

Followers of the Duchy of Tradgardland may remember this post from June 2007 regarding the foundation legend of the Duchy-
http://tradgardland.blogspot.co.uk/2007/06/legend-of-golden-herring.html

Legend tells that one of the aforementioned mystical Herrings was preserved and kept for posterity in specially made reliquary. It was entrusted to a noble family within Tradgardland to be the Heredity Keepers of the Herring. Here is Axel von Tradgardstadtwald the keeper in the late 15th Century- 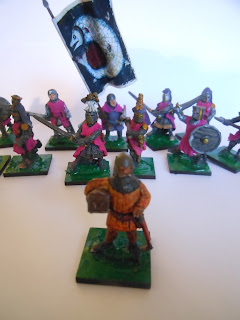 He is seen carrying the Reliquary under his right arm,his hand upon the hilt of his sword showing his willingness to protect this sacred item even unto death...
But who are these men in the background? 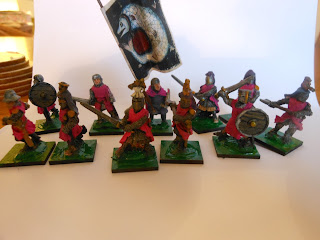 They are the Golden Herring Knights ,the chief order of chivalry in the Duchy. Sworn to protecting the Duchy ,the Duke and the Golden Herring, they are men of honour and great courage. Always fighting on foot as a symbol of their humility ( as well as having sold their horses upon entering the Order to give money for the benevolence of all fishermen) they are always in the forefront of all battles.Even in the late 15th early 16th century they retain the traditional antiquated armour from the Order's arsenal.

Today is my 53rd birthday and I am home after a busy day at work awaiting a splendid meal and presents . A fortunate chap indeed!

Figures are old Citadel medievals painted up for some forthcoming Oldhammer type action.Mores units to show you soon...
Posted by tradgardmastare at 17:30