Yesterday I mention a parcel which arrived here at the Duchy.It came from Conrad @ Joy and Forgetfulness.Here it is during the sorting process this afternoon - just the sort of exciting job for a dull, dreek day,a little like an exploration into  exciting ,uncharted territory... 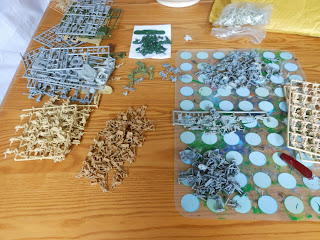 First to be looked at was an assortment of  tank parts,bases,88mm guns and diverse interesting building bits.They are most interesting and await rationalization later this week. Next the figures were sorted and de-sprued - 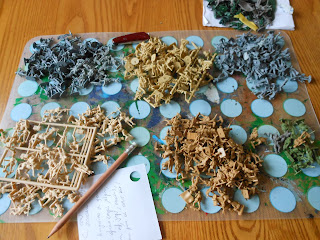 What a collection of goodies-
The Duchy of Volare-Cantare has now got some Bersaglieri and Alpini (with skiers and mules!!!)

There are is opposition for the Duchy of C-V in the form of either a mix of WW1 Austro/Hungarians/Germans or WW2 Germans.I'm inclining to then former but what do you think ?

There are 19th C Besaglieri too with Zouaves and Italian (?) Cavalry to be the start of an 19th century project- Duchy of C-V 150 years or so ago?Maybe using Neil Thomas's book and rules for the 19th Century.

Loads also of  Africa Korps ( still thinking of an idea for them- any thoughts?) and WW2 Airfix Japanese ( maybe convert some to Italian troops ) and some Russians too. Ooophs nearly forgot the German paratroops- probably to be used against my Home Guard chaps/What a haul,what a sort,what inspiration - many thanks Conrad!!
Posted by tradgardmastare at 15:16