I have been looking around for options for the game and in doing so recall toy soldiers of my childhood. I always had two sides Britains v Timpo and the rest when using 54mm figures. The Britains were the good guys and the Timpo ones the baddies. I thought the Timpo ones were fine and was happy to have a variety of them but to me Britains were much superior. I think I have retained that view ever since.
I have been thinking of a background to my interwar gaming partly based on what l have available and partly on Pathe News footage l have viewed for inspiration. So we have Army Red v Army Orange,White and Green. Army Red are the King’s Army and  ArmyOWG are their celtic speaking neighbours. Relations between the two countries are cordially, since the OWG fellows gained their independence peacefully but occasional disputes occur. This was established by the fact that I had some AIP figures about who would pass as 1930s Irish. I am still doubtful about mixing the plastic and lead but considering the price of Dinky tanks l need to save money somewhere. 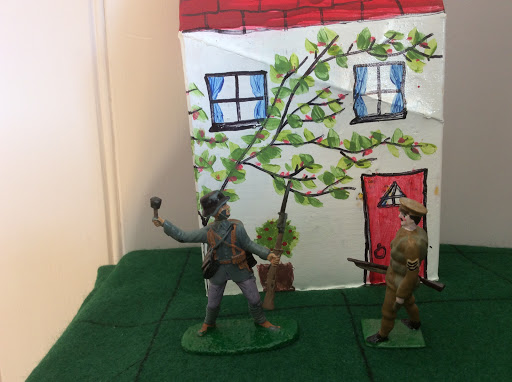 As this is the World of toy soldiers there is absolutely no political element to my choice of sides,after all it is fantasy and merely a conceit for some fun modelling and gaming . I wish to offend no one. So here it is . A game built from plastic,lead ,celluloid and paper nothing more.
Finally all the best to England for this afternoon’s game from everyone here in Tradgardland!🏴󠁧󠁢󠁥󠁮󠁧󠁿🏴󠁧󠁢󠁥󠁮󠁧󠁿🏴󠁧󠁢󠁥󠁮󠁧󠁿🏴󠁧󠁢󠁥󠁮󠁧󠁿
Posted by tradgardmastare at 09:58