I got a mixed joblot of Guards etc off EBay and they arrived yesterday. In with them were four Britains/ Herald Lifeguards. They were headless and had missing arms. However it was interesting that someone had worked on them by cutting down the long boots and giving them a partial paint job. I wondered what to do with them. Then it came to me I would replace the arms but more importantly give them some Guards heads and they would work as  Royal Scots Grey dismounted cavalry. Here they are in process- 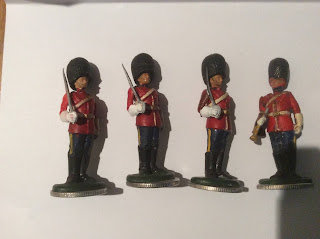 I will never know who started these but I am very happy to take their hard work forward. 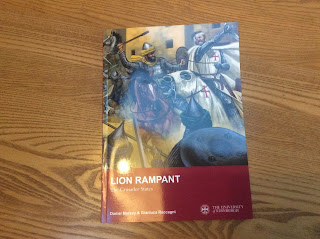 On a different note some years ago I heard Dan Mersey speak at an event in Blackwells Edinburgh put on in conjunction with folk from the University of Edinburgh. He spoke well, was an interesting chap to talk  to and some games were played in the venue afterwards. I was due to go to another event about wargaming put on by the university a while back but it was cancelled due to Covid 19. I have been following with interest, on Facebook, the move towards the publication of a cooperative book between academics and gamers. It came out and My copy arrived yesterday.