Beyond the fields we know *

Twenty five years ago l had a table tennis table set up for gaming , nothing fancy but a surface. I then downsized , the table travelled with us and has never been set up since. It probably will never be and frankly l am not interested in having a set up that big even if I had the space which l don’t. 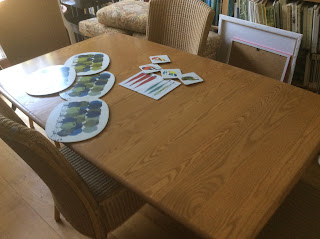 This is the dining room table which was cleared of piles of stuff ( clothes but mainly my two arty daughters paper, paint and numerous art materials) for a family birthday yesterday. When extended it is seven foot long by just under three feet wide. It has the potential for games to be played on it ,left up briefly and finished later be they solo or with others. The idea is to continue with the rolling programme of games on the Theatrum Mundi with bigger games on the table as and when.
It seems sensible to collect armies and to build them from here with that maximum table size in mind. Ok I will have bigger collections to use at a friends but l will gear the vast majority of projects to this table size as a maximum. Most projects will be smaller .
Here’s where you come in . First l wonder what you think of this plan and the tenability of such a narrow table. Secondly in terms of 28mm figures what is the maximum number of units one might use on such a table top? I am currently thinking in terms of 40mm square based infantry figures in units of around five bases. Same possibily 50mm Square for cavalry.
Finally the post title will be explained in my next post...