There seems to be a lot to think about currently, too much. Children starting new chapters in their lives for example  I am not sure why I feel a tad overwhelmed by everything. I have been enjoying the Hundred, the Olympics and other wireless / tv dramas, reading a bit and pottering around in the garden and painting desk. Hit the crisps, biscuits and cheese too much this week and am not sleeping too well. Part of it may relate to Jan’s sixth anniversary a fortnight today and these strange times but l’m not sure. Anyway a good thing was l played my second face to face game. We commanded the Swiss against the Burgundians of Charles the Bold but lost .Both armies belong to my regular opponent btw .It was a good, close run thing. I do so like the aesthetics of the late 15th Century and these armies in particular. They have always caught my imagination. Here are a couple of pictures of the game- 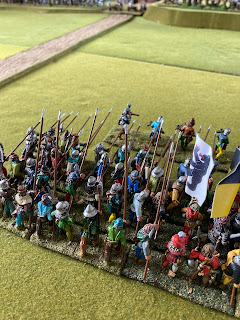 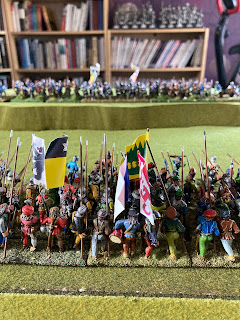