A start with Mark’s Little Soldiers

Yesterday saw me unpack and start a few of MLS soldiers which arrived in profusion this week. They , as said elsewhere, are well cast, tall and with minimal flash. They are a easy to paint compared to others I tried recently. However l am currently tired and caught up with real life , if not physically then mentally. August, as we go through the latter half of the month, becomes a lead up to Jan’s anniversary on the 30th. The girls need extra support to negotiate this time be they local or far away.This was compounded this year by what would have been my late father’s 95th birthday on the 26th. There is a sense of relief when we enter September.

Anyway a start has been made with painting and I have even made a simple conversion, more of which anon. 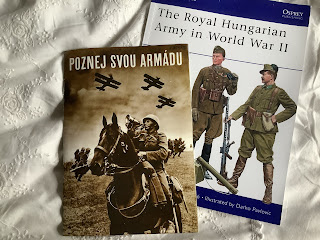 The above picture is of some of my reading currently. I can’t seem to find the suitable Tintin volume around the house but am looking. It’s the one about King Ottokar. Anyway what has been developing in my mind are two tiny states which have come out from what was the former Austrian Hungarian Empire . One ( a tad like Mark’s Slovskan) is a well equipped modern army with a Czech vibe whilst the other is rather more backward looking, overly bureaucratic and less modern in tactical outlook. It is based around Austrian and Hungarian armies of the period. I will use Mark’s Bergland figures for it. Name suggestions welcome! 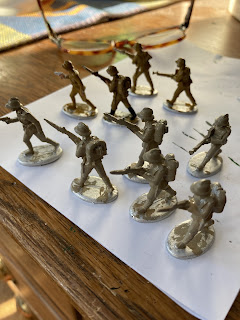 So here we are. Watch this space for further developments…