I’ve been trying to finish off my AWI militia and riflemen.These are the ones I got as part of an order with Ronnie from Fife & Drum in America. Not too much is left to do prior to basing. The mdf bases were  glued to felt yesterday afternoon and lay under a pile of heavy books to adhere them together. Hopefully over the coming days I will get some time to complete these. 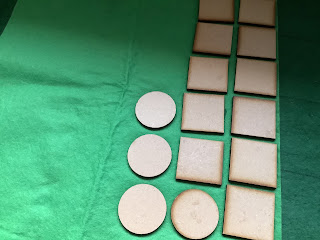 The bases need cut out with scissors and then the figures attached with super glue. The round bases are for the riflemen and the squares for the militia. The small round base is for the force commander. 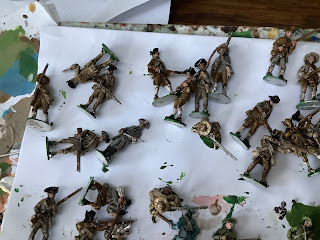 I quite like the idea of returning to the K.F.C for the games. This was a small American county - Karl Frederick County populated by Tradgardland settlers and name after the duke of whence they came. The inspiration was the battle of Oriskany and Nicolas Herkimer.

The militia and riflemen will defend against a force of Hessians and Native Americans.