The rules that never were- kleine kreig fur kinder 2

Been playing around with ideas for these imaginary rules. The non existent original is a crumpled pamphlet , in gothic script, found in a box of abandoned toys in an attic somewhere in mittel Europe that looks much like Nuremberg but isn’t.

The game commences with each side taking turn about to place one figure on the board. Each square can hold up to 3 infantry, three cavalry, two tanks or one machine gun/ artillery.

Infantry fire with one d6 , machine gun, tank with four as do artillery.

Range unlimited for artillery, four for mg/ tank and three for infantry.

And that’s it so far. Pictures below are me working out arc of fire for machine guns and simple infantry combat. 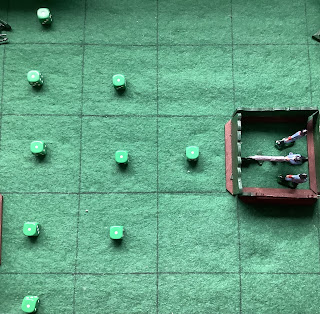 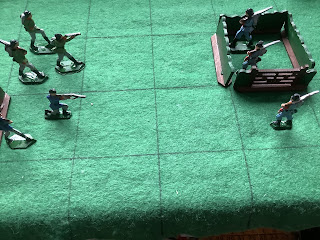 Currently looking at ideas of officer figures and what role they have on the table top, simple morale and melee. Game is lacking flavour  but not sure how to add it…