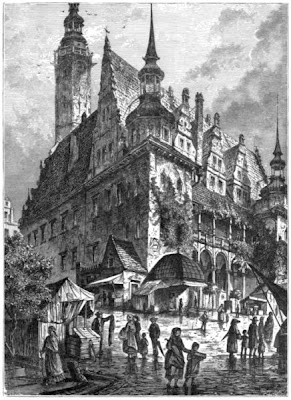 Taking one wrong turn in the back streets of Tradgardstadt was unfortunate, taking more than one was utter folly...

Those who did so would find themselves in a decaying slum within a slum. They would be lucky to get out alive -obviously without any valuables they possessed!

Towering over all else in the Syldavian quarter was a large inn namely "The Black Pelican." It formed the social,political,religious and cultural heart ( a black one of course) for the community of Syldavian exiles which sought to make a living within the Duchy of Tradgardland.

The inn was large and looked as if it had grown from the putrid earth itself rather than being built by human hands. The sense of something organic was almost tangible . Within, all was stained black by the smoke from the roaring fires and the never extinguished pipes of those who frequented the place. No dog passing the kitchen yard was safe and the yelps of the unwary could be heard frequently by passers by.

Tonight the inn was busier than ever for a Freikorp Kaptain was recruiting - no questions asked, no soul too warped and no rest for the wicked!
Posted by tradgardmastare at 18:16