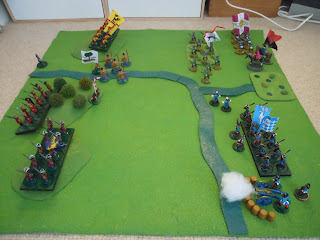 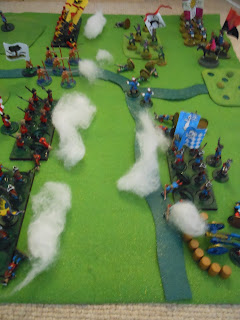 A few turns later the battle is well underway. Grenadiers advance across the stream,skirmishers deployed in broken ground and musket fire exchanged. Casualties have been inflicted on both sides... 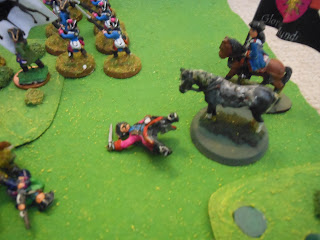 A lucky shot by one of the light infantry has hit Duke Karl Frederick in his capacity as general. 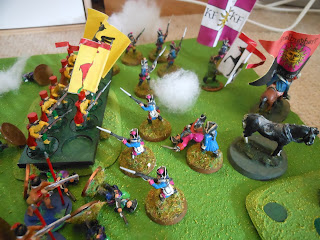 With his army in disarray the Duke's body is defended by his fellow Tradgardlanders in the face of the onslaught from the enemy. The battle ended with the army fleeing off the table with the lifeless Duke being carried homeward by his loyal men

Another enjoyable ( albeit dramatic encounter) on a small playing surface. All forces involved could be stored into a  box file. The battle was fought using ideas gleaned from many rules sets with no formal rules down on paper. This approach was learned from Fitzbadger and his seminal "We don't need no stinkin rules " of some time ago.
Posted by tradgardmastare at 12:39