The battle of Drei Hugel 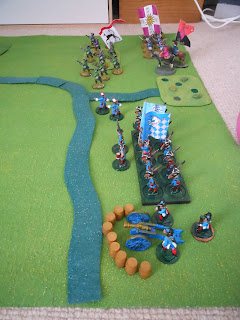 Duke Karl Frederick of Tradgardland has involved himself once more in the ongoing "petit guerre" waged in the Disputed Valley. As well as bringing a battalion of Tradgarland Militia , he finds himself in command on the battlefield. His force consists of ( as well as the aforementioned Tradgardlanders) some light infantry,a detachment of grenadiers,one militia battalion and an artillery piece. Below  is a picture of his opponents deployed across the battlefield- 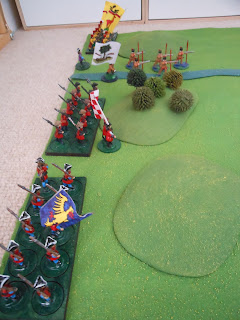 Deployed behind the Three Hills  are three battalions of Militia- each from separate towns within the disputed Valley including one of the descendants of Syldavian mercenaries. A small company of rifle armed jaeger are present too.

The politics of the Disputed Valley are baroque in the extreme and it is impossible to give good reasons for the forthcoming battle save to say that it is part of an ongoing feud of shifting alliances which plagues the Valley.