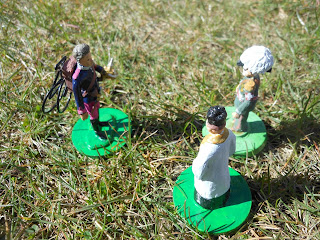 In the grounds of the castle, which dominates the whole of Thun, Duke Albert of Tradgardland converses with General Really -Constant and his chaplain Fr Chantry-Pigg.The Duke has been offered a place on the General's Staff for the forthcoming battles at the Centenary jamboree.
He is keen to learn from such a modern army as that of Army Red/White but hopes also to interest them in the new fangled Pederson folding bicycle which has been adopted by the Tradgardland army.
Posted by tradgardmastare at 16:01