Back to work after the long weekend and the sun comes out today! It was good to be off. Amongst other things I was preparing the ground for a forthcoming extension to the Ducal Palace. Red chippings needed to be moved and the ground laid bare for the foundations. 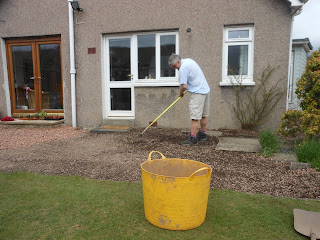 Also the grass was cut for the first time this year.A busy but enjoyable time was had in the garden.
On my return from work today I discovered that Army Red /White had finally marched home-thanks Paul!
They had marched to Camberley,got delayed by the Post Office and now had made their way North once more to the Duchy.It is good to see them back. 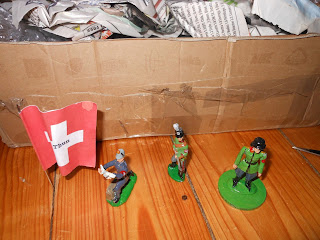 Here they can be seen leaving their box- a carrier pigeon released to take a message to Headquarters at Thun Castle,the flag planted and two cavalrymen stand vigilent beside it.
Posted by tradgardmastare at 19:57