Dear Mother,
Finally back at the inn,it was a long day. 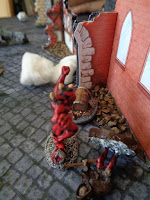 Arold got more than he bargained for with that lamp- out popped a genie and it nearly did for him!
Old Albert's marksmanship nearly killed the genie but it was finished  off by our rivals (nice if flashy folk) in the end. After carrying it away Arold has the genie's lamp as a souvenir and will bring it home to decorate the kitchen. We got ever so much treasure including  a fate stone ( don't ask) to go with that tatty ,useless grimoire of mud. Erik the enchanter is very pleased with us all and there will be rat scratchings on our gruel as a reward. We are to be joined by a ranger and a hound ( cute but deadly they say) for our next expedition. I must close now and send my love and a couple of gold coins I have sealed in this letter.
Simon
p.s hope you like the painting of the genie it was done by an out of work artist here called Rogier
This was my second game of Frostgrave,played a week ago with Richard.It was most enjoyable and I urge you to give it a go if you have not already done so.