Fridays have become a regular Zoom gaming session using the Dba rules. They give an interesting tactical challenge as well as an enjoyable game. Recent weeks has seen the ongoing struggle between the Burgundians and the Swiss. We have fought this struggle over many years with many different sets of rules. Before Lockdown we had started reusing the George Gush Renaissance rules as a change from dbm. Last week my Swiss  won a very close run thing. This coming week we want to mix things up a little with mounted bowmen ( 15th Century dragoons if you know what I mean sort of) and dismounted men at arms. The following week I hope to have a medieval German Army ready and posted to my friend’s house for a change. Being Dba an army consists of 12 elements which equates to under fifty figures. Not too much to finish. 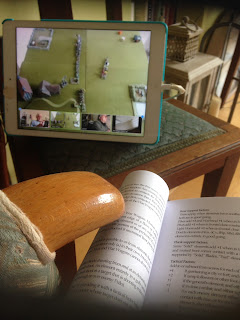 Last week’s game in progress, rules at the ready. Technology coming in so handy. 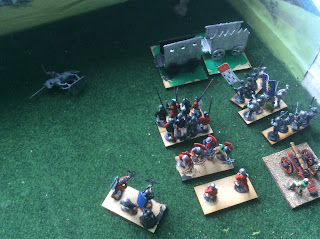 The Germans in progress.They represent the army of the Holy Roman Emperor at the siege of Neuss. I am looking forward to to seeing how they will fare on the battlefield for their first game but they need to be finished, packed and posted first. Others plans include a Dithmarshen army, but one thing at a time.